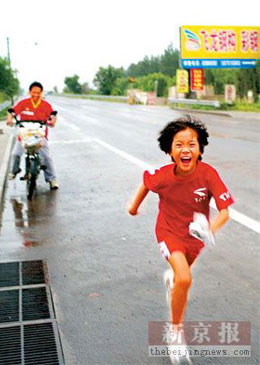 Zhang Huimin, an 8-year-old Chinese girl, has completed her 3558 kilometres running quest from Hainan to Beijing on August 26.

Zhang started her journey from Sanya, China’s southernmost city, and took 55 days to reach Beijing City. Her father accompanied her all the way on a bicycle.

Nicknamed the Little Magic Deer, Zhang first caught attention in January 2007 when she spent 17 days on an 840-kilometre long run around Hainan Island.

The effort came with a price though… as the young kid has to undergo rigorous training. Many netizens have urged her father, Zhang Jianmin, to give up his strict regimen, which they fear would inflict pain on the physically immature girl.

It’s up for debate whether her father is doing the right thing, but from the pic it seems the little Zhang was enjoying her run. It’s an amazing feat nonetheless.