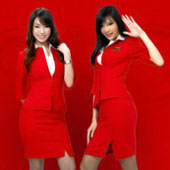 A political delegate from Kelantan, Malaysia, said the uniforms of the female cabin crew of budget airline AirAsia are too short and “show too much skin.”

Wanita UMNO’s Kubang Kerian delegate Zaleha Hussin said the uniform is an embarrassment to women. She called on the government to compel the Malaysian carrier to change the uniform, which she felt was too revealing.

I think AirAsia’s female flight attendants look great in the uniform. It looks sleek, and kinda sexy, but in good taste. It’s the kind of fashion that women wear to work in many other professions these days; Madam Hussin will have to ask many others to change their attire if she’s serious about her statement.