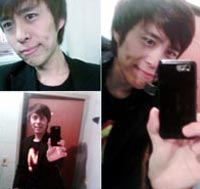 Initial investigations suggested that Kim committed suicide because of career block and online harassment of his sexual preference, while Jang chosen the path because of a broken relationship.

I’ve read somewhere that there was at least another two copycat suicide since Choi’s death… and the Korean authorities are fearing that the suicide chain would create a domino effect in the Korean society, which is already fragile with their high suicide rate.

The Korean government is drafting a law against malicious rumours and slandering via the internet, as the online harassment is seen as one of the major causes of entertainers’ suicide.

I doubt the law could work though; and the effect would be minimal even if it works, because the problem is not the internet itself… it’s a cultural and society problem.

Internet is just a medium that pulled the final trigger; there are still other mediums for spreading rumours and slanders… what the Koreans need are to find the root cause and solve the problems once and for all.

This will be the final year of my 30's. Time flies, and it seems to fade faster as one gets older. This post is a bit of recap of my adult life and some future … END_OF_DOCUMENT_TOKEN_TO_BE_REPLACED

Trailer for American film Top Gun: Maverick, a sequel to 1986's Top Gun. Beautiful is not the usual word to associate with action movies, but I cannot find a better … END_OF_DOCUMENT_TOKEN_TO_BE_REPLACED

Malaysia will be in lockdown from March 18 to March 31, 2020, to deal with the Covid-19 situation. Officially it's a Movement Control Order (MCO) but it's … END_OF_DOCUMENT_TOKEN_TO_BE_REPLACED

Korean pop idol Sulli, former member of girl group f(x), was found dead at her home on Monday. Authorities are investigating the cause of death, and it's presumed … END_OF_DOCUMENT_TOKEN_TO_BE_REPLACED

Singapore has imposed the circuit breaker measures to curb the spread of Covid-19 since early April. They announced an extension (until June 1) and some new rules a … END_OF_DOCUMENT_TOKEN_TO_BE_REPLACED

A cute photo series amidst the Covid-19 lockdown in Malaysia. Armed forces are present to assist the police to enforce the Movement Control Order (MCO) across the … END_OF_DOCUMENT_TOKEN_TO_BE_REPLACED