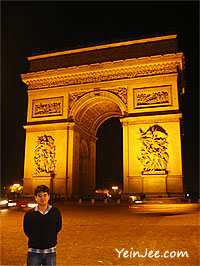 We dropped by the Arc de Triomphe for a short photo session on our way back from Seine.

I would love to climb my way to the top to have a panoramic view of the area, especially the famous Avenue des Champs-Élysée. Too bad our time was limited as we only had a short stay in Paris, and Arc de Triomphe was not the tour’s priority.

Officially the Arc de Triomphe de l’Étoile, the monument was commissioned in early 19th century to commemorate Napoleon’s victory at the Battle of Austerlitz. Today, the arch honours those who fought for France over the years. Beneath the Arc there’s also the Tomb of the Unknown Soldier from the First World War.

The Arc de Triomphe de l’Étoile is the most famous monument of its kind, but the largest Arc of Triumph is surprisingly in Pyongyang, North Korea, which was built in 1982 and was deliberately built to be larger than the Paris one.