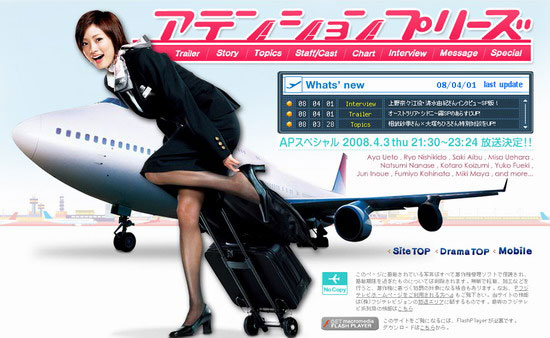 [Synopsis] Yoko Misaki (Aya Ueto) was a boyish girl who was raised among three brothers after losing her mother at young age. She enjoyed the company of boys over girls, and formed a rock band among her male friends.

One day, a member of her band and someone whom she admired, Tsukasa, had decided to leave for Tokyo. Misaki and her band members went to the airport to bid Tsukasa farewell, and that’s when Tsukasa jokingly said that he would love to see Misaki in flight attendant’s uniform.

Misaki somehow took Tsukasa’s joke seriously and went for a interview and got accepted into a training school, and that’s when trouble begins…

The drama was quite a hit when it aired in Japan, with two special episodes being produced in 2007 and 2008 respectively by popular demand.

The drama is a bit nonsense, funny and heart warming. The storyline is just ok, but it gives the audiences some lessons on how flight attendants are trained, and the importance and responsibilities of the cabin crew besides serving coffee and tea.

Aya Ueto and Ryo Nishikido look good as always, but it’s the supporting cast that provides the sparks. Veterans like Miki Maya, Fumiyo Kohinata and Mantaro Koichi show that good acting outshines good looks for most of the time.

This will be the final year of my 30's. Time flies, and it seems to fade faster as one gets older. This post is a bit of recap of my adult life and some future … END_OF_DOCUMENT_TOKEN_TO_BE_REPLACED

Trailer for American film Top Gun: Maverick, a sequel to 1986's Top Gun. Beautiful is not the usual word to associate with action movies, but I cannot find a better … END_OF_DOCUMENT_TOKEN_TO_BE_REPLACED

Malaysia will be in lockdown from March 18 to March 31, 2020, to deal with the Covid-19 situation. Officially it's a Movement Control Order (MCO) but it's … END_OF_DOCUMENT_TOKEN_TO_BE_REPLACED

Korean pop idol Sulli, former member of girl group f(x), was found dead at her home on Monday. Authorities are investigating the cause of death, and it's presumed … END_OF_DOCUMENT_TOKEN_TO_BE_REPLACED

Singapore has imposed the circuit breaker measures to curb the spread of Covid-19 since early April. They announced an extension (until June 1) and some new rules a … END_OF_DOCUMENT_TOKEN_TO_BE_REPLACED

A cute photo series amidst the Covid-19 lockdown in Malaysia. Armed forces are present to assist the police to enforce the Movement Control Order (MCO) across the … END_OF_DOCUMENT_TOKEN_TO_BE_REPLACED