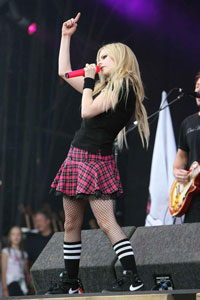 It’s official, Avril’s KL Concert is on. The Malaysian authority has changed their mind with the earlier decision to bar the Canadian pop star from performing in Kuala Lumpur on August 29th.

Avril has told MTV earlier that the concert will go ahead as planned; and there were other sources hinting that Galaxy Group, the concert promoter, has successfully appeal to the initial ban. It has now been officially confirmed that the show will go on.

Earlier this week, Malaysian authority made the call to bar Avril from performing as scheduled, stating that the concert is unsuitable for Malaysian culture, particularly not when the country is celebrating independence day on August 31.

The decision echoed the call from an Islamic opposition party for the show to be scrapped, that the show is considered too sexy for Malaysians and would promote the wrong values as Malaysia’s independence day is looming near.

It’s almost deja vu for Malaysians… as the authority had barred Indonesian singer Inul Daratista from performing in 2008 following similar protest. Luckily for Avril’s fans, Galaxy has managed to appeal for the concert to run as planned.

Do mind that Malaysians in general are not that conservative; in fact lots of the Muslims are quite liberal in these kind of matters. Unfortunately the men that make the initial decision were not quite as open minded… glad that the final decision makers are showing more sense.

This will be the final year of my 30's. Time flies, and it seems to fade faster as one gets older. This post is a bit of recap of my adult life and some future … END_OF_DOCUMENT_TOKEN_TO_BE_REPLACED

Trailer for American film Top Gun: Maverick, a sequel to 1986's Top Gun. Beautiful is not the usual word to associate with action movies, but I cannot find a better … END_OF_DOCUMENT_TOKEN_TO_BE_REPLACED

Malaysia will be in lockdown from March 18 to March 31, 2020, to deal with the Covid-19 situation. Officially it's a Movement Control Order (MCO) but it's … END_OF_DOCUMENT_TOKEN_TO_BE_REPLACED

Korean pop idol Sulli, former member of girl group f(x), was found dead at her home on Monday. Authorities are investigating the cause of death, and it's presumed … END_OF_DOCUMENT_TOKEN_TO_BE_REPLACED

Singapore has imposed the circuit breaker measures to curb the spread of Covid-19 since early April. They announced an extension (until June 1) and some new rules a … END_OF_DOCUMENT_TOKEN_TO_BE_REPLACED

A cute photo series amidst the Covid-19 lockdown in Malaysia. Armed forces are present to assist the police to enforce the Movement Control Order (MCO) across the … END_OF_DOCUMENT_TOKEN_TO_BE_REPLACED