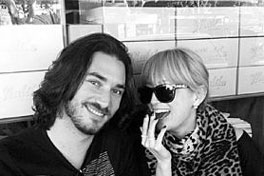 Japanese pop star Ayumi Hamasaki is going to divorce with Austrian actor Manuel Schwarz after just a year into marriage.

Hamasaki told fans that she initiated the split, explaining that she felt unable to keep the promise she made to Schwarz, who lives in Los Angeles, that the pair would live together in America. “Since the Tohoku disaster, I have had the feeling that I don’t want to be apart from Japan,” she wrote. “As a result I have been spending more and more days away from him.”

“We spoke about this and thought we could maintain our relationship by travelling to see each other, but at some point, physical distance becomes emotional distance,” she explained. “When I thought about our future, I realized I couldn’t see myself returning to the state of mind I was in when I agreed to live in America.”

The couple met each other when filming the MV for Hamasaki’s Virgin Road in August 2010. They tied the knot in Las Vegas on January 1, 2011.

This will be the final year of my 30's. Time flies, and it seems to fade faster as one gets older. This post is a bit of recap of my adult life and some future … END_OF_DOCUMENT_TOKEN_TO_BE_REPLACED

Trailer for American film Top Gun: Maverick, a sequel to 1986's Top Gun. Beautiful is not the usual word to associate with action movies, but I cannot find a better … END_OF_DOCUMENT_TOKEN_TO_BE_REPLACED

Malaysia will be in lockdown from March 18 to March 31, 2020, to deal with the Covid-19 situation. Officially it's a Movement Control Order (MCO) but it's … END_OF_DOCUMENT_TOKEN_TO_BE_REPLACED

Korean pop idol Sulli, former member of girl group f(x), was found dead at her home on Monday. Authorities are investigating the cause of death, and it's presumed … END_OF_DOCUMENT_TOKEN_TO_BE_REPLACED

Singapore has imposed the circuit breaker measures to curb the spread of Covid-19 since early April. They announced an extension (until June 1) and some new rules a … END_OF_DOCUMENT_TOKEN_TO_BE_REPLACED

A cute photo series amidst the Covid-19 lockdown in Malaysia. Armed forces are present to assist the police to enforce the Movement Control Order (MCO) across the … END_OF_DOCUMENT_TOKEN_TO_BE_REPLACED