So, what do you think about the opening ceremony of the Beijing 2008 Olympic Games on Friday night? It’s a decent show for me; not great, but nice.

The ceremony started off well. The fou (the drum like instrument) performance managed to draw the crowds’ attention, the giant footsteps’ fireworks were cool, and the countdown managed to boost the mood very well.

Then came the splendid fireworks, followed by the formalities of flag raising and national anthem singing.

The masterpiece of the show was revealed after that… the giant paper scroll, which was quite captivating at first. The initial performances still managed to keep me in front on the TV, but things started to turn boring for a few reasons…

1. Over-artistic. It’s a masterful art show, which Zhang Yimou is really good at, no question about that. Thing is, not all audiences were having similar artistic value… that’s a reason why the likes of “Transformers” or “Dark Knight” are selling better than “Atonement” or “Babel” etc… it’s about appealing to the mass. 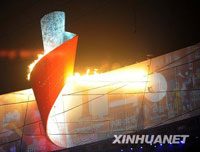 The lighting of torch by Li Ning
(Image from Xinhuanet)

It’s ok if there was one or two ‘deeper’ performances, but when most parts of the show were thought-provoking… it became a bit too tiring to watch on.

2. Over-dependent on the scroll. It was a creative idea to start with, but everything seemed to be revolving on the scroll… lack of variety obviously.

3. The quality of filming. The camera angles and timings were poor… lots of the features were not nicely shot and couldn’t be seen clearly.

4. Too Chinese oriented… which could be good or bad depending on personal preferences. I think it’s overdone on showing the Chinese culture… it doesn’t really fit the “One World, One Dream” theme, and I couldn’t feel the Olympic spirit until the earth popped up.

5. Too Chinese’ Chinese oriented. There are 55 ethnic groups officially recognised by the Chinese government… but did they manage to show the fact?

Fine, it was just a show, but imagine this – if the minorities are sidelined in every other aspects in real life like the opening ceremony… little wonder why there are so many protest against the centre government.

Ok, enough bad stuff… it was not a bad show after all. There were a few memorable highlights… the taichi, the dove, the fireworks, Sarah Brightman, and the splendid lights and sounds throughout.

The final torch lighting was nice as well. Li Ning was the final torch bearer as rumoured; and when he started ‘flying’ into the sky, I believe there are lots of ‘ooh’ ‘aah’ around the world… and then he started running in the air, which actually looked a bit odd, but I like it. It was a great ending for the show.

There were some other performances after that, mostly from the pop stars… but the live broadcast ended just after Jackie Chan and Karen Mok’s performances, which was kinda disappointing. Not sure if other regions managed to watch the rest of the show… no luck for me obviously.

Overall, I’ll give a 7/10 for the opening ceremony. The middle of the show was just ok, but they managed an awesome start and ended it in a high note.

This will be the final year of my 30's. Time flies, and it seems to fade faster as one gets older. This post is a bit of recap of my adult life and some future … END_OF_DOCUMENT_TOKEN_TO_BE_REPLACED

Trailer for American film Top Gun: Maverick, a sequel to 1986's Top Gun. Beautiful is not the usual word to associate with action movies, but I cannot find a better … END_OF_DOCUMENT_TOKEN_TO_BE_REPLACED

Malaysia will be in lockdown from March 18 to March 31, 2020, to deal with the Covid-19 situation. Officially it's a Movement Control Order (MCO) but it's … END_OF_DOCUMENT_TOKEN_TO_BE_REPLACED

Korean pop idol Sulli, former member of girl group f(x), was found dead at her home on Monday. Authorities are investigating the cause of death, and it's presumed … END_OF_DOCUMENT_TOKEN_TO_BE_REPLACED

Singapore has imposed the circuit breaker measures to curb the spread of Covid-19 since early April. They announced an extension (until June 1) and some new rules a … END_OF_DOCUMENT_TOKEN_TO_BE_REPLACED

A cute photo series amidst the Covid-19 lockdown in Malaysia. Armed forces are present to assist the police to enforce the Movement Control Order (MCO) across the … END_OF_DOCUMENT_TOKEN_TO_BE_REPLACED