A few more hours to go before the opening ceremony of Beijing Olympics. Some random news and information about Olympics and happenings in Beijing…

The number ‘8’ is seen as a symbol of prosperity for Chinese. The Beijing organisers are optimising their wish for prosperity to the max obviously… by running the opening ceremony on 8.08pm, on the 8th of August, 2008.

Renowned director Zhang Yimou and choreographer Zhang Jigang are the co-directors for tonight’s show at the Beijing National Stadium.

It’s still a mystery on who will light the Olympic flame at the opening ceremony. It’s heavily rumoured that gymnastic legend Li Ning will take the honour; we’ll see how true the speculations are.

Ode to the Olympics

A large scale oil-painting titled “Ode to the Olympics” was opened to the public on August 6. Artist Liu Ningyi and his daughter Liu Haomei took seven years to complete the masterpiece, which measures 112 metres (112 years of modern Olympic history) in length and five meters (representing the five Olympic Rings) in height. 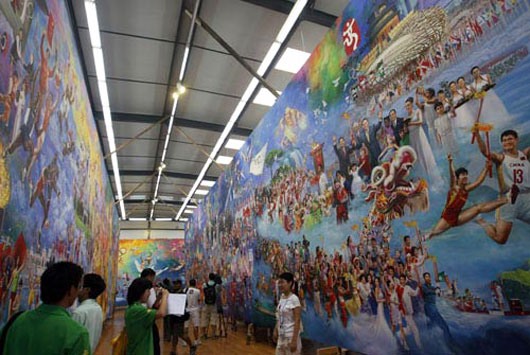 Ode to the Olympics (Image from Beijing2008)

In the past few days, Lu and his father shuttled between newly arrived athletes and asked for their autographs in his notebook. The signatures include those of Chinese basketball star Yi Jianlian and Spanish tennis star Rafael Nadal etc. [via Cri]

A foreign lady was ‘asking’ for hugs at a tourist spot in Beijing… probably one of the free-hugs campaigners. The translation doesn’t sound right though; free-huggers normally carry a sign-board ‘free hugs’ offering by-passers a free hug, but those Chinese words read ‘give me a hug’ instead, which actually sounds begging… 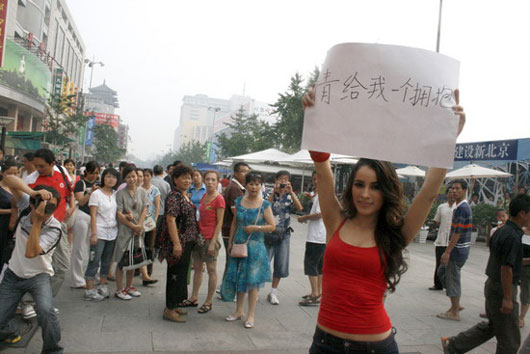 Give me a free hug? (Image via Xinhuanet)

Search engine Google would create special logos during holiday seasons or special occasions… and here it is, for Beijing Olympics…

This will be the final year of my 30's. Time flies, and it seems to fade faster as one gets older. This post is a bit of recap of my adult life and some future … END_OF_DOCUMENT_TOKEN_TO_BE_REPLACED

Been planning for a while to make Japan my next big trip destination. Seems like its not happening soon because of other commitments. And I want to avoid the … END_OF_DOCUMENT_TOKEN_TO_BE_REPLACED

Scanned picture of a 1998 cover of the Victoria's Secret swimwear catalogue. The models are Stephanie Seymour, Daniela Peštová and Tyra Banks - the first generation … END_OF_DOCUMENT_TOKEN_TO_BE_REPLACED

Trailer for American film Top Gun: Maverick, a sequel to 1986's Top Gun. Beautiful is not the usual word to associate with action movies, but I cannot find a better … END_OF_DOCUMENT_TOKEN_TO_BE_REPLACED

Singapore has imposed the circuit breaker measures to curb the spread of Covid-19 since early April. They announced an extension (until June 1) and some new rules a … END_OF_DOCUMENT_TOKEN_TO_BE_REPLACED

A cute photo series amidst the Covid-19 lockdown in Malaysia. Armed forces are present to assist the police to enforce the Movement Control Order (MCO) across the … END_OF_DOCUMENT_TOKEN_TO_BE_REPLACED

Malaysia will be in lockdown from March 18 to March 31, 2020, to deal with the Covid-19 situation. Officially it's a Movement Control Order (MCO) but it's … END_OF_DOCUMENT_TOKEN_TO_BE_REPLACED

Korean pop idol Sulli, former member of girl group f(x), was found dead at her home on Monday. Authorities are investigating the cause of death, and it's presumed … END_OF_DOCUMENT_TOKEN_TO_BE_REPLACED