Some random stuff about Beijing Olympics…

US president George W Bush visited the US women’s beach volleyball team on August 9 during their training session. It was a happy visit obviously… 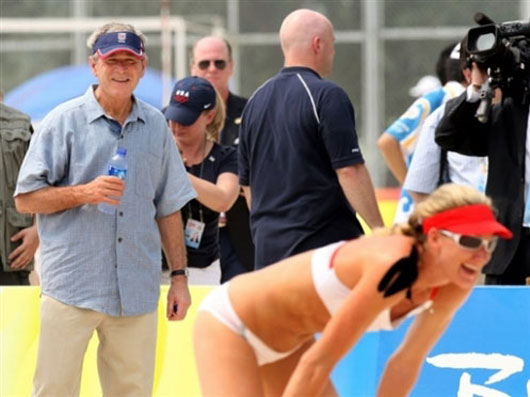 Lee Myung-bak is happy too, but…

South Korean president Lee Myung-bak must be happy with the achievement of his athletes thus far, but he was probably not too happy with a photo of him carrying the Korean flag upside down on August 9 while cheering for the women’s handball team… 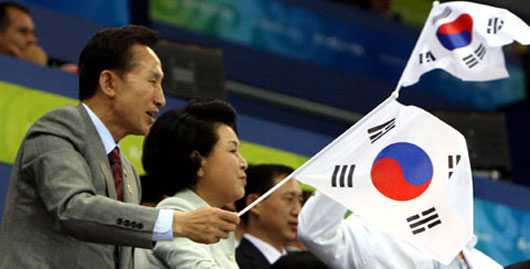 Lee Myung-bak with the upside down flag (Image from Chosun)

To be frank, I didn’t know that the Korean flag is not symmetrical; apparently there are some differences on how the ‘stripes’ are arranged. Korean netizens were not too happy about the mistake, but the president was spared with focus being shifted to the medal tallies which the Koreans are doing really well at the moment.

Gold medallists at the Beijing Olympics are granted rights to the ‘stadium jukebox’ in which their songs of choice would be played around the hall shortly before the medal presentation.

The Chinese athletes were mostly playing patriotic songs after their victory; while a couple of Koreans decided to go easy… judo champ Choi Min-ho picked a song from pop star Lee Hyori while swimmer Park Tae-hwan chose a song from girls group SNSD.

The cute and the talented

Lin Miaoke, the 9-year-old girl who ‘sang’ the song during the opening ceremony, is becoming an international sensation following her performance. Little known though, is that she was not the real singer during the live show.

The real voice behind the performance is a 7-year-old girl named Yang Peiyee… but Lin was chosen to appear at front stage for her cuter image to wow the audiences. Well, they certainly managed to achieve the purpose, at least for now; but is the gimmick necessary? It’s not fair for both kids in my opinion.

South African swimmer Natalie du Toit and Polish table tennis player Natalia Partyka are the only two athletes that are going to take part in both the Olympic and Paralympic Games in Beijing 2008.

Natalie, 24, was the flag carrier during the opening ceremony. Her leg was amputated at the knee after a scooter accident in 2001. She will compete in the 10km open water race event in the Olympics.

Natalia, 19, was born with a right arm that ends at the elbow. She will play in team event in women table tennis in the Olympics.

The first ever amputee to compete in Olympics was gymnast George Eyser with a wooden prosthesis for his left leg in 1904. Amazingly, he won three gold medals… including a rope climbing event (ya, Olympics were really fun in those days).

This will be the final year of my 30's. Time flies, and it seems to fade faster as one gets older. This post is a bit of recap of my adult life and some future … END_OF_DOCUMENT_TOKEN_TO_BE_REPLACED

Trailer for American film Top Gun: Maverick, a sequel to 1986's Top Gun. Beautiful is not the usual word to associate with action movies, but I cannot find a better … END_OF_DOCUMENT_TOKEN_TO_BE_REPLACED

Malaysia will be in lockdown from March 18 to March 31, 2020, to deal with the Covid-19 situation. Officially it's a Movement Control Order (MCO) but it's … END_OF_DOCUMENT_TOKEN_TO_BE_REPLACED

Korean pop idol Sulli, former member of girl group f(x), was found dead at her home on Monday. Authorities are investigating the cause of death, and it's presumed … END_OF_DOCUMENT_TOKEN_TO_BE_REPLACED

Singapore has imposed the circuit breaker measures to curb the spread of Covid-19 since early April. They announced an extension (until June 1) and some new rules a … END_OF_DOCUMENT_TOKEN_TO_BE_REPLACED

A cute photo series amidst the Covid-19 lockdown in Malaysia. Armed forces are present to assist the police to enforce the Movement Control Order (MCO) across the … END_OF_DOCUMENT_TOKEN_TO_BE_REPLACED