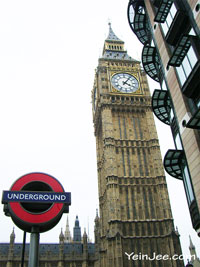 The Clock Tower, famously known as Big Ben, is the name of the tower at Houses of Parliament in London. The Chinese affectionately call it the Big Dumb Bell for its pronunciation pun.

Big Ben is not the tower’s official name though; it’s actually the nickname of the clock’s main bell (officially the Grand Bell). But these days the name is synonymous with the tower as a whole.

Big Ben wouldn’t have existed if it wasn’t for the 1834 fire that destroyed most of the Parliament building. A commission was set up then to choose a new design for the building, with Charles Barry’s plan the eventual winner. The clock swung into action in July 1859.