Korean actress Jun Ji-hyun, or Gianna Jun, is kicking off the promotion campaign for her “Hollywood” debut movie, Blood: The Last Vampire, a live action adaptation of the same title Japanese animated film (2000). 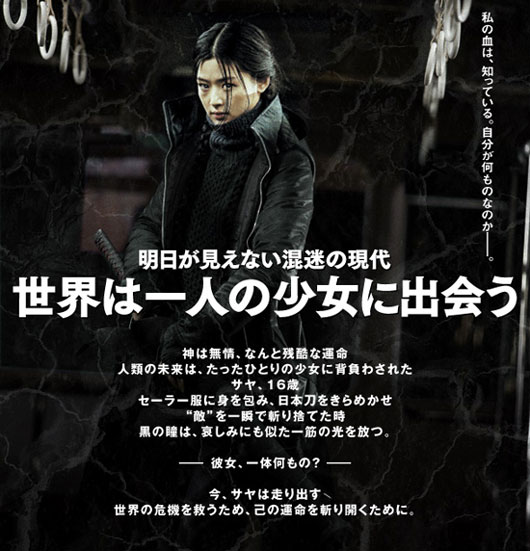 Jun has started her promotion in Japan where the movie – simply titled as Last Blood [Jp] – will make its global premiere on May 29. The actress looks pretty cool in the stills, but things are not doing too well for the film at the moment.

There’s not much buzz created for the movie, and the trailer (British version) looks kinda disappointing. Besides, the Blood fanbase aren’t as huge as the likes of Dragonball (the live adaptation was really bad btw), there won’t be enough people who support the film based on interest alone.

Blood: The Last Vampire will be released in Europe in mid-June, but the US release date has not yet been set, which could be another huge concern. In worst case scenario, the US distributor might turn it into a DVD release if it’s not doing well in other markets. I wonder if it could still be called a Hollywood debut if it happens.

[Update] Sony Pictures has acquired the US rights for the movie; Gianna is getting a Hollywood debut after all.

This will be the final year of my 30's. Time flies, and it seems to fade faster as one gets older. This post is a bit of recap of my adult life and some future … END_OF_DOCUMENT_TOKEN_TO_BE_REPLACED

Trailer for American film Top Gun: Maverick, a sequel to 1986's Top Gun. Beautiful is not the usual word to associate with action movies, but I cannot find a better … END_OF_DOCUMENT_TOKEN_TO_BE_REPLACED

Malaysia will be in lockdown from March 18 to March 31, 2020, to deal with the Covid-19 situation. Officially it's a Movement Control Order (MCO) but it's … END_OF_DOCUMENT_TOKEN_TO_BE_REPLACED

Korean pop idol Sulli, former member of girl group f(x), was found dead at her home on Monday. Authorities are investigating the cause of death, and it's presumed … END_OF_DOCUMENT_TOKEN_TO_BE_REPLACED

Singapore has imposed the circuit breaker measures to curb the spread of Covid-19 since early April. They announced an extension (until June 1) and some new rules a … END_OF_DOCUMENT_TOKEN_TO_BE_REPLACED

A cute photo series amidst the Covid-19 lockdown in Malaysia. Armed forces are present to assist the police to enforce the Movement Control Order (MCO) across the … END_OF_DOCUMENT_TOKEN_TO_BE_REPLACED