First destination during my Europe trip in October 2005, the Buckingham Palace. 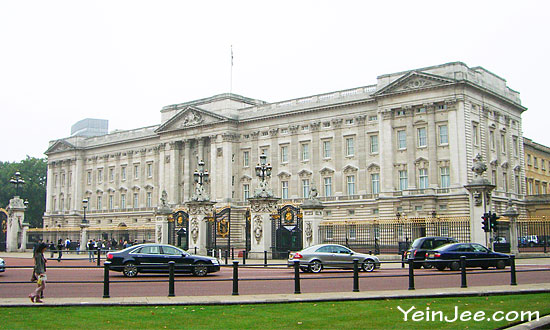 Wandering in London by foot was not my original plan; wanted to visit Oxford instead, but woke up late due to jet-lag. It was near noon when I reached the Victoria Station, so it’s more logical to stay in the city instead of going outskirt.

One thing great about London, at least in the city centre, is that it’s full of historical monuments and places. I knew I would bump into some interesting spots without any particular destination in mind. And within minutes from the station, I reached a familiar spot – Buckingham Palace, the Queen’s official residence.

Not sure if the Guard Changing ceremony was held that day, the routine is normally done on alternate days. I caught the show when I was in London in 2001, quite an eye opener. Don’t miss it if you are visiting London.

Buckingham Palace is also commonly known as the Buck House, or simply The Palace by the British.

The Palace has 775 rooms. These include 19 State rooms, 52 Royal and guest bedrooms, 188 staff bedrooms, 92 offices and 78 bathrooms. In measurements, the building is 108 metres long across the front, 120 metres deep (including the central quadrangle) and 24 metres high.

If the queen is in the palace, they will fly the Royal Standard flag, otherwise it’s the Union Jack instead.

The first building in the area is believed to be built by Sir William Blake around 1624. The house which forms the architectural core of the present palace was built for the first Duke of Buckingham and Normanby in 1703.

King George III bought Buckingham House in 1761 for his wife Queen Charlotte to use as a personal retreat to St James’s Palace, where many court functions were held. Buckingham House also became known as the Queen’s House.

In 1913 decision was taken to reface the façade. Sir Aston Webb was commissioned to create a new design, and the work was completed just before the outbreak of the First World War in 1914.

This will be the final year of my 30's. Time flies, and it seems to fade faster as one gets older. This post is a bit of recap of my adult life and some future … END_OF_DOCUMENT_TOKEN_TO_BE_REPLACED

Trailer for American film Top Gun: Maverick, a sequel to 1986's Top Gun. Beautiful is not the usual word to associate with action movies, but I cannot find a better … END_OF_DOCUMENT_TOKEN_TO_BE_REPLACED

Malaysia will be in lockdown from March 18 to March 31, 2020, to deal with the Covid-19 situation. Officially it's a Movement Control Order (MCO) but it's … END_OF_DOCUMENT_TOKEN_TO_BE_REPLACED

Korean pop idol Sulli, former member of girl group f(x), was found dead at her home on Monday. Authorities are investigating the cause of death, and it's presumed … END_OF_DOCUMENT_TOKEN_TO_BE_REPLACED

Singapore has imposed the circuit breaker measures to curb the spread of Covid-19 since early April. They announced an extension (until June 1) and some new rules a … END_OF_DOCUMENT_TOKEN_TO_BE_REPLACED

A cute photo series amidst the Covid-19 lockdown in Malaysia. Armed forces are present to assist the police to enforce the Movement Control Order (MCO) across the … END_OF_DOCUMENT_TOKEN_TO_BE_REPLACED