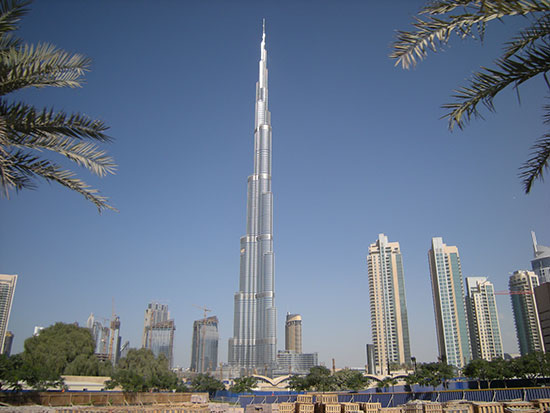 3. The exact height was not revealed until final stages of the construction.

5. It was previously known as Burj Dubai.

16. Highest (insert here) which requires another long list to be completed ;p

18. It would take just a minute to reach from ground level to top floor.

26. The architecture features a triple-lobed footprint, an abstraction of the Hymenocallis flower.

27. The Y-shaped floor plan aims to maximize views of the Gulf.

28. Over 1,000 pieces of art from prominent Middle Eastern and international artists will adorn the tower and the surrounding Emaar Boulevard.

31. During peak cooling conditions, the tower will require around 12,500 tons of cooling, equivalent to the cooling capacity of about 10,000 tons of melting ice.

33. The tower’s architect and engineer is Skidmore, Owings and Merrill (Chicago).

38. It took some 22 million man-hours to be completed.

39. On downside, foreign construction workers were pay as little as $4 per day.

42. Total weight of aluminium used is equivalent to that of five A380 aircraft.

48. The building is part of the a 490-acre flagship development called Downtown Burj Khalifa.

49. Burj Khalifa is about twice the height of Empire State Building (443m).

51. It’s the first world’s tallest structure in history to include residential space.

52. It will feature the world’s first Armani Hotel, which occupies 15 of the lower 39 floors.

54. Jan 4, its opening date, was the birthday of Sir Isaac Newton.

55. Around 12,000 people are expected to live and work in the tower when it’s fully occupied.

This will be the final year of my 30's. Time flies, and it seems to fade faster as one gets older. This post is a bit of recap of my adult life and some future … END_OF_DOCUMENT_TOKEN_TO_BE_REPLACED

Been planning for a while to make Japan my next big trip destination. Seems like its not happening soon because of other commitments. And I want to avoid the … END_OF_DOCUMENT_TOKEN_TO_BE_REPLACED

Scanned picture of a 1998 cover of the Victoria's Secret swimwear catalogue. The models are Stephanie Seymour, Daniela Peštová and Tyra Banks - the first generation … END_OF_DOCUMENT_TOKEN_TO_BE_REPLACED

Trailer for American film Top Gun: Maverick, a sequel to 1986's Top Gun. Beautiful is not the usual word to associate with action movies, but I cannot find a better … END_OF_DOCUMENT_TOKEN_TO_BE_REPLACED

Singapore has imposed the circuit breaker measures to curb the spread of Covid-19 since early April. They announced an extension (until June 1) and some new rules a … END_OF_DOCUMENT_TOKEN_TO_BE_REPLACED

A cute photo series amidst the Covid-19 lockdown in Malaysia. Armed forces are present to assist the police to enforce the Movement Control Order (MCO) across the … END_OF_DOCUMENT_TOKEN_TO_BE_REPLACED

Malaysia will be in lockdown from March 18 to March 31, 2020, to deal with the Covid-19 situation. Officially it's a Movement Control Order (MCO) but it's … END_OF_DOCUMENT_TOKEN_TO_BE_REPLACED

Korean pop idol Sulli, former member of girl group f(x), was found dead at her home on Monday. Authorities are investigating the cause of death, and it's presumed … END_OF_DOCUMENT_TOKEN_TO_BE_REPLACED