Took a day tour to Bath and Stonehenge during my UK trip in 2005. The tour departed on 8am on a MPV, with a driver-guide and 13 other tourists.

The driver stopped midway on the road, and pointed us to a large horse-like figure on a hill slope distance away. Honestly I was blurred about what he said (something about chalk), as I never heard of anything about it before… 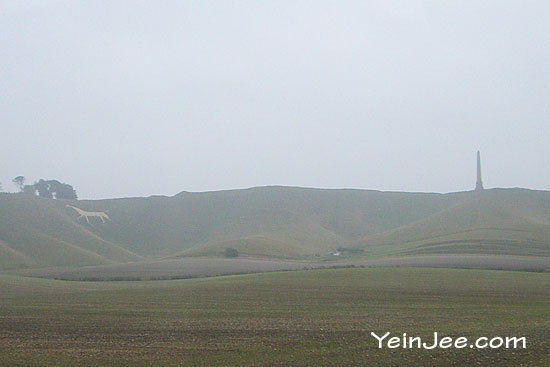 I only read about its details after the trip, and learnt that the ‘horse’ is the Cherhill White Horse, or Oldbury White Horse, which is located in the Wiltshire County.

It’s one of the famous chalk figures – also known as hill figures – that have been carved into hillsides in England. The figures were usually created by clearing the soil on the hillside and exposed the bedrock which is normally white chalk, a form of limestone.

There are varied reasons for carving the figures; most of the white horses are believed to be carved as a symbol of good luck. The age of the figures varied too, from as old as Bronze Age to as recent as the past century. The Cherhill White Horse that I was seeing was created in 1780.

The figures need to be maintained regularly to stay visible. A major restoration was carried out on Cherhill White Horse in August 2002 which involved re-cutting the outline of the horse and resurfacing it with 160 tonnes of fresh chalk.

Nearby the Cherhill White Horse is an obelisk, the Lansdowne Monument, which was erected in 1845 by the Third Marquis of Lansdowne to commemorate his ancestor, Sir William Petty. It’s said that the obelisk is the highest point between London and Bristol.

This will be the final year of my 30's. Time flies, and it seems to fade faster as one gets older. This post is a bit of recap of my adult life and some future … END_OF_DOCUMENT_TOKEN_TO_BE_REPLACED

Trailer for American film Top Gun: Maverick, a sequel to 1986's Top Gun. Beautiful is not the usual word to associate with action movies, but I cannot find a better … END_OF_DOCUMENT_TOKEN_TO_BE_REPLACED

Malaysia will be in lockdown from March 18 to March 31, 2020, to deal with the Covid-19 situation. Officially it's a Movement Control Order (MCO) but it's … END_OF_DOCUMENT_TOKEN_TO_BE_REPLACED

Korean pop idol Sulli, former member of girl group f(x), was found dead at her home on Monday. Authorities are investigating the cause of death, and it's presumed … END_OF_DOCUMENT_TOKEN_TO_BE_REPLACED

Singapore has imposed the circuit breaker measures to curb the spread of Covid-19 since early April. They announced an extension (until June 1) and some new rules a … END_OF_DOCUMENT_TOKEN_TO_BE_REPLACED

A cute photo series amidst the Covid-19 lockdown in Malaysia. Armed forces are present to assist the police to enforce the Movement Control Order (MCO) across the … END_OF_DOCUMENT_TOKEN_TO_BE_REPLACED