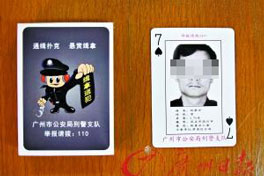 China’s Guangzhou City has captured one of their most wanted men partly thanks to some play cards distributed by the police.

50,000 sets of play cards were given out to the public for free earlier this month, with information of 54 of the city’s most wanted fugitives printed on the cards.

And through that the authorities have successfully located the where-about of the 47-year-old fugitive (wanted for a 2004 murder case), who surrendered himself realising that the cops were around the corner.