China is planning to create the world’s biggest mega city by merging nine cities to create a metropolis twice the size of Wales with a population of 42 million. 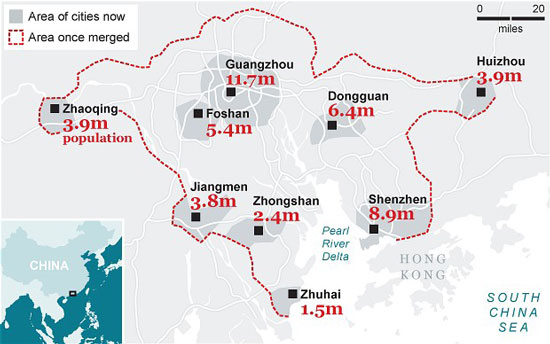 The “Turn Pearl River Delta Into One” scheme will cover a large part of China’s manufacturing heartland, stretching from Guangzhou to Shenzhen and including Foshan, Dongguan, Zhongshan, Zhuhai, Jiangmen, Huizhou and Zhaoqing.

Over the next six years, around 150 major infrastructure projects will mesh the transport, energy, water and telecommunications networks of the nine cities together, at a cost of some 2 trillion yuan (£190 billion). More on Telegraph.