The Dragon Boat Festival (Duanwu Festival) is celebrated by the Chinese on the fifth day of the fifth month on the Chinese calendar (June 8 this year).

The festival is celebrated to commemorate ancient poet Qu Yuan, who jumped into a river and killed himself after his country was conquered by the other.

Locals who admired his patriotism fed rice dumplings to the fishes in the river which he committed suicide so that the fish would not disturb his body… some others also rode on boats and beating on drums to scare away the fishes for the same purpose. 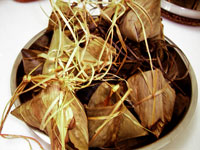 These acts are still practiced by the Chinese these days, albeit heavily modified. People these days would take part in dragon boat race and eat traditional rice dumplings called zongzi to celebrate the festival.

Dragon boat race is a huge tourist attraction in some places (Hong Kong, Taiwan etc.) during the festival each year.

Zongzi is made of glutinous rice stuffed with different fillings and wrapped in bamboo leaves. Different region would have their own uniqueness in terms of flavours and shapes. It can be plain, sweet or salty.

The common zongzi that we made at home here is stuffed with nuts and meat. We normally called it bakchang literally meat-zongzi in Hokkien dialect).

Btw, my Chinese birthday is one the same day with this festival… we don’t often celebrate birthday according to Chinese calendar though.

This will be the final year of my 30's. Time flies, and it seems to fade faster as one gets older. This post is a bit of recap of my adult life and some future … END_OF_DOCUMENT_TOKEN_TO_BE_REPLACED

Trailer for American film Top Gun: Maverick, a sequel to 1986's Top Gun. Beautiful is not the usual word to associate with action movies, but I cannot find a better … END_OF_DOCUMENT_TOKEN_TO_BE_REPLACED

Malaysia will be in lockdown from March 18 to March 31, 2020, to deal with the Covid-19 situation. Officially it's a Movement Control Order (MCO) but it's … END_OF_DOCUMENT_TOKEN_TO_BE_REPLACED

Korean pop idol Sulli, former member of girl group f(x), was found dead at her home on Monday. Authorities are investigating the cause of death, and it's presumed … END_OF_DOCUMENT_TOKEN_TO_BE_REPLACED

Singapore has imposed the circuit breaker measures to curb the spread of Covid-19 since early April. They announced an extension (until June 1) and some new rules a … END_OF_DOCUMENT_TOKEN_TO_BE_REPLACED

A cute photo series amidst the Covid-19 lockdown in Malaysia. Armed forces are present to assist the police to enforce the Movement Control Order (MCO) across the … END_OF_DOCUMENT_TOKEN_TO_BE_REPLACED