D-War (디워, or Dragon Wars) is a 2007 Korean-English film, directed by Shim Hyung-rae and starred Amanda Brooks and Jason Behr etc. The movie was Korea’s largest-budgeted film at the time of making. 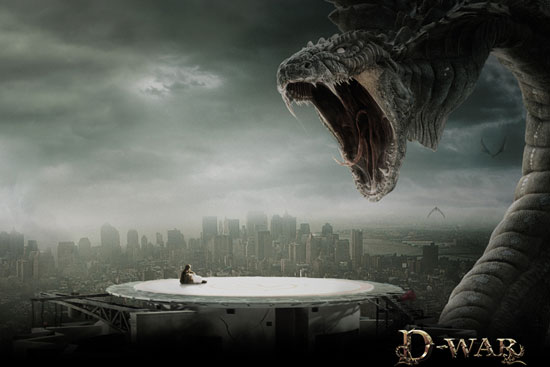 D-War is infamously dubbed by many as one of the worst movies ever. Ironically the negative publicity was so bad that it actually helped arousing some curiosity (me included) among foreigners. Sadly enough, it’s pretty bad indeed lol.

Yuh-Yi-Joo is a human being with the ability to turn an Imoogi (mytical giant serpent) into a powerful dragon.

500 years ago in ancient Korea, the Yuh-Yi-Joo and her guardian sacrificed themselves from being taken control by the Buraki – an evil giant serpent. The two of them were reborn as Sarah and Ethan in the modern Los Angeles.

Ethan knew of his past life since childhood and was looking for Sarah ever since in order to protect her. But the Bukari was awakened by the reincarnated Yuh-Yi-Joo as well and was hunting her down; and a war broke out in the city as Bukari’s powerful legions went on battle with the LAPD and US armed force.

Ethan and Sarah were captured near the end, and just when the evil serpent was going to consume the Yuh-Yi-Joo’s energy, another (supposedly good) Imoogi appeared and fought with the Bukari.

It’s difficult to explain why the movie sucks. I mean, it’s not totally worthless, but there’s plenty of WTF moments from the beginning of the movie till the end.

There were plenty of copied ideas from other Hollywood movies to begin with. The plot was weak and there’s almost no connection from one scene to another, with ‘surprises’ coming out of no way and faded senselessly as well.

The CGI was not the highest standard, but it’s oddly fun to watch the fictional creatures going on war with the human beings on earth.

Still, I’ll give props to the film makers for trying to explore the genre which is uncommon in the Korean movie scene; and also for the courage trying to break into the international market. They still have a long way to go though.

This will be the final year of my 30's. Time flies, and it seems to fade faster as one gets older. This post is a bit of recap of my adult life and some future … END_OF_DOCUMENT_TOKEN_TO_BE_REPLACED

Trailer for American film Top Gun: Maverick, a sequel to 1986's Top Gun. Beautiful is not the usual word to associate with action movies, but I cannot find a better … END_OF_DOCUMENT_TOKEN_TO_BE_REPLACED

Malaysia will be in lockdown from March 18 to March 31, 2020, to deal with the Covid-19 situation. Officially it's a Movement Control Order (MCO) but it's … END_OF_DOCUMENT_TOKEN_TO_BE_REPLACED

Korean pop idol Sulli, former member of girl group f(x), was found dead at her home on Monday. Authorities are investigating the cause of death, and it's presumed … END_OF_DOCUMENT_TOKEN_TO_BE_REPLACED

Singapore has imposed the circuit breaker measures to curb the spread of Covid-19 since early April. They announced an extension (until June 1) and some new rules a … END_OF_DOCUMENT_TOKEN_TO_BE_REPLACED

A cute photo series amidst the Covid-19 lockdown in Malaysia. Armed forces are present to assist the police to enforce the Movement Control Order (MCO) across the … END_OF_DOCUMENT_TOKEN_TO_BE_REPLACED