Dr Ross Garnaut, a professor of economics at the Australian National University, has urged Australians to ditch beef and lamb for kangaroo steaks to help save the planet in his recent climate study commissioned by the Australian government. 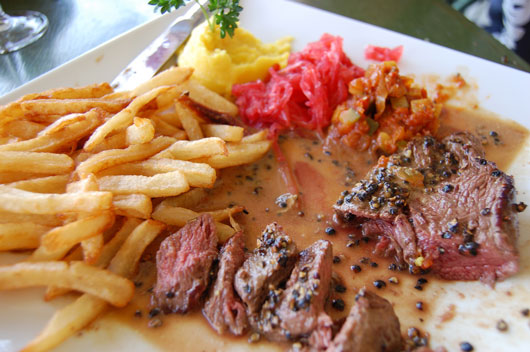 Image by Shoreline, who said the kangaroo meat was so amazingly GOOD!

Dr Garnaut is not the first scholar to raise the thought; Dr George Wilson of the Australian Wildlife Services suggested in August 2008 of farming the kangaroos to reduce greenhouse gas emissions.

Sheep and cows account for 11% of Australia’s carbon footprint. The methane gas produced by these livestocks through belching and flatulence is more potent than carbon dioxide in the damage it can cause to the environment, but kangaroos produce virtually no methane because their digestive systems are different.

The thought of replacing beef and lamb with kangaroo meat might be facing some tough challenge in Australia where the skippy animal is seen as the national icon. Some of the Aussies are already adapting to having kangaroo meat as an exotic food… but it could take a long while for them to adopt the idea of having it as a daily dish.

Some netizens are suggesting that instead of replacing one meat with another, people should be encouraged to simply eat less meat and go for vege… sounds logical enough, but some hardcore meat-eater might find it hard for not having a steak or burger in a day or two.

In Malaysia it’s not uncommon to have deer meat or ostrich meat, but haven’t heard of any restaurants selling kangaroo meat yet. Have you tried any kangaroo dishes?

This will be the final year of my 30's. Time flies, and it seems to fade faster as one gets older. This post is a bit of recap of my adult life and some future … END_OF_DOCUMENT_TOKEN_TO_BE_REPLACED

Trailer for American film Top Gun: Maverick, a sequel to 1986's Top Gun. Beautiful is not the usual word to associate with action movies, but I cannot find a better … END_OF_DOCUMENT_TOKEN_TO_BE_REPLACED

Malaysia will be in lockdown from March 18 to March 31, 2020, to deal with the Covid-19 situation. Officially it's a Movement Control Order (MCO) but it's … END_OF_DOCUMENT_TOKEN_TO_BE_REPLACED

Korean pop idol Sulli, former member of girl group f(x), was found dead at her home on Monday. Authorities are investigating the cause of death, and it's presumed … END_OF_DOCUMENT_TOKEN_TO_BE_REPLACED

Singapore has imposed the circuit breaker measures to curb the spread of Covid-19 since early April. They announced an extension (until June 1) and some new rules a … END_OF_DOCUMENT_TOKEN_TO_BE_REPLACED

A cute photo series amidst the Covid-19 lockdown in Malaysia. Armed forces are present to assist the police to enforce the Movement Control Order (MCO) across the … END_OF_DOCUMENT_TOKEN_TO_BE_REPLACED