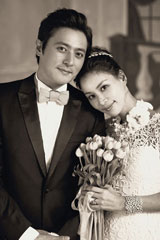 Remember the Taiwanese guy who rose to internet fame with his Whitney-Houston-like rendition? Well, he’s dueting with William Shatner in a US show [1].