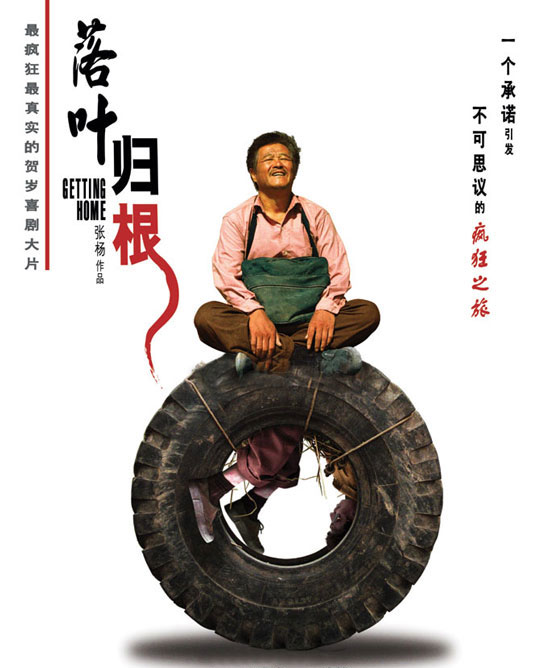 Zhao and Liu were two migrant workers and good friends who left their respective villages and travelled thousand of miles away to Shenzhen to make a better living.

Liu passed away unexpectedly after a night of drinking, and Zhao (Zhao Benshan) decided to keep his promise to bring the remain to be buried in his hometown, and thus embarked on a long journey from Shenzhen to Chongqing.

Having limited budget, Zhao had to resort to carrying Liu on his back and hitch-hiking along the way, in which he met variety of people with different personality – some good, some bad and some weird…

The movie was very well received in China, as it shows some sad reality of modern China (albeit in a comedic way) while also showing some of the good things. It shares dark humour, random sadness, unconditional love, amazing sceneries, undying commitment, total weirdness and most importantly… facts of life.

Zhao Benshan played the role to perfection, showing the naive but honest nature of a Chinese labour who tried to fulfill a difficult promise. Other small and cameo roles are equally interesting and was played by some of the most popular artists in mainland China.

If you are into Chinese movies and culture, this is a highly recommended movie. Western movie critics have given the movie some nice ratings, but I think the westerners might be difficult to appreciate the movie if they don’t know much about the Chinese culture… worth trying though.

This will be the final year of my 30's. Time flies, and it seems to fade faster as one gets older. This post is a bit of recap of my adult life and some future … END_OF_DOCUMENT_TOKEN_TO_BE_REPLACED

Been planning for a while to make Japan my next big trip destination. Seems like its not happening soon because of other commitments. And I want to avoid the … END_OF_DOCUMENT_TOKEN_TO_BE_REPLACED

Scanned picture of a 1998 cover of the Victoria's Secret swimwear catalogue. The models are Stephanie Seymour, Daniela Peštová and Tyra Banks - the first generation … END_OF_DOCUMENT_TOKEN_TO_BE_REPLACED

Trailer for American film Top Gun: Maverick, a sequel to 1986's Top Gun. Beautiful is not the usual word to associate with action movies, but I cannot find a better … END_OF_DOCUMENT_TOKEN_TO_BE_REPLACED

Singapore has imposed the circuit breaker measures to curb the spread of Covid-19 since early April. They announced an extension (until June 1) and some new rules a … END_OF_DOCUMENT_TOKEN_TO_BE_REPLACED

A cute photo series amidst the Covid-19 lockdown in Malaysia. Armed forces are present to assist the police to enforce the Movement Control Order (MCO) across the … END_OF_DOCUMENT_TOKEN_TO_BE_REPLACED

Malaysia will be in lockdown from March 18 to March 31, 2020, to deal with the Covid-19 situation. Officially it's a Movement Control Order (MCO) but it's … END_OF_DOCUMENT_TOKEN_TO_BE_REPLACED

Korean pop idol Sulli, former member of girl group f(x), was found dead at her home on Monday. Authorities are investigating the cause of death, and it's presumed … END_OF_DOCUMENT_TOKEN_TO_BE_REPLACED