The largest truffle found in Italy this year was sold for USD200,000 at a charity auction that was held simultaneously in Abu Dhabi, Macau, London and Rome on November 29. 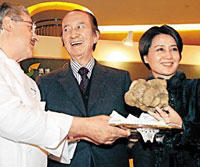 Truffle is a precious ingredient in Italian and French gourmet for its pungent aroma and taste. White truffle is considered the best truffle; a kilogram of normal size white truffle could cost over $5000.

A total of $284,000 were raised from this auction event, with a few smaller truffles being sold as well. The money will be donated to selected charities in the cities that held the synchronised auction.