Official main teaser for Hollywood film Godzilla, the third American production (1956, 1998) based on the Japanese Godzilla franchise. In theatres May 2014.

It’s not obvious in the trailer but there’s another monster (or two) in the plot. The Godzilla is probably the good fella here like in some of the Japanese instalments. It’s just doing its own thing though, it’s like showing who’s the real boss instead of being a hero or trying to save the world.

Not sure if it’s going to live up to its hype, the video looks decent cinematography wise but we all know teasers are not always trustworthy. Good or bad I think it’s going to do well in box office.

Godzilla is a giant monster first appeared in a namesake Japanese film in 1954. The name is a portmanteau of two Japanese words, Gorilla and Whale. The original pronunciation is closer to Gojira (gorira + kujira) instead. Many fans also like to pronounce it that way instead of god-zil-la.

In general it is an enormous, violent, prehistoric sea monster empowered by nuclear radiation. It’s a metaphor for nuclear weapons in early days, depicting the destruction by the atomic bombings of Hiroshima and Nagasaki in the Second World War. The idea struck the cord of the Japanese.

The first film is still highly acclaimed worldwide but many of its successors are B-movie quality with few good ones in between. The most popular instalment in Japan in terms of ticket sales (including reissues) is King Kong vs. Godzilla from 1962, while the original came in second.

In term of gross revenue the highest is the American remake in 1998. The highest grossing Japanese production is Godzilla, Mothra and King Ghidorah: Giant Monsters All-Out Attack in 2001 (what a long title LoL.) Inflation plays a huge part in this sense, bet the 2014 film is going to beat the record.

The franchise has inspired the growth of kaiju genre (aka monster films) in Japan, including spin-offs and new creations by rival studios. Most of those are relatively unknown in the western world though.

Yeah, that’s the tagline from the 1998 American remake, more on that movie later.

The initial idea was that it should be taller than most of the buildings (in Tokyo). By proportion the current Godzilla is actually “smaller” because most of the skyscrapers are taller than that these days.

The 2014 movie poster (below) is out of scale BTW. It’s set in San Francisco and the city has at least 69 buildings taller than Godzilla. It looks like a terrifying monster though, IF it’s really that big. 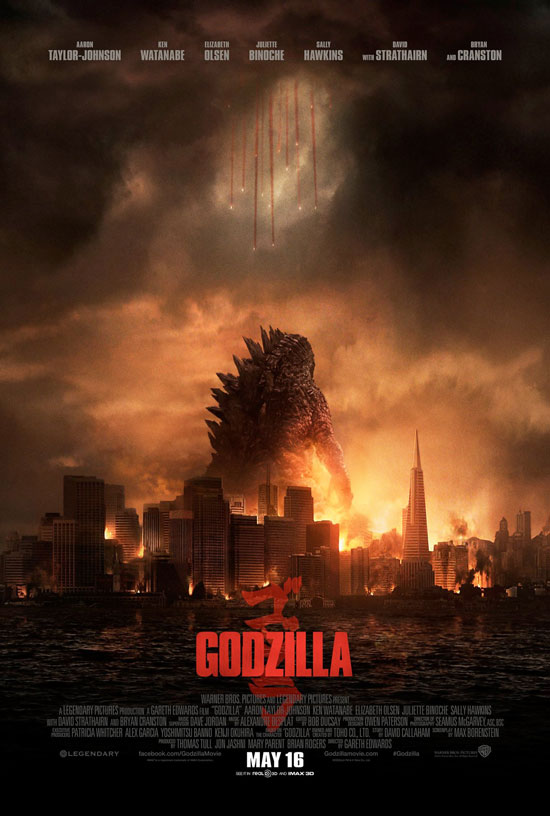 This latest film is the 30th instalment of the franchise. Depends on interpretation this is the second Hollywood production and not the third as I first mentioned. The 1956 American remake was actually a heavily reworked version of the 1954 original with some new footage instead of made from scratch.

Regardless, America reboot it in 1998 and simply named it as Godzilla. It received negative reviews but was a box office success. Personally I think it was OK but I understand why the fans and critics hate it. It’s better seen as a generic monster film instead of a Godzilla remake because it fails to represent the franchise.

The new 2014 movie is another reboot and not a sequel. And it’s yet again simply titled as Godzilla (these guys need to get creative, really.) Didn’t expect to wait this long for another Hollywood one but I think that has to do with getting the copyright as the Japanese stakeholder was really pissed with the 1998 film.

Hope it’s all good this time. At least the character design looks more like a Godzilla instead of a giant dinosaur. And the theme is also not as comical and gleeful as the “failed” version.

Rest of the story

Today Godzilla is a pop culture icon in East Asia. And I guess the rest of the world are pretty familiar with it as well because of media exposure and widespread internet contents.

Like it or hate it, I think the 1998 production helps a lot to put the franchise outside of its common zone. Many people, especially outside of Asia, started to learn about the big monster from that film instead.

Besides movies, Godzilla also features in video games, comics and merchandises. It also appears in various crossovers with other media brands and as parodies some other times.

Wonder what the Japanese studio (and people) will feel if this new American remake becomes a huge success. There’s obviously pride in one sense but there’s probably embarrassment too as a foreign production is better in representing their cultural icon. Guess they will have to up the ante.

The 2014 remake was a success, both critically and in global box office. I watched that on a flight many months later, and it’s pretty entertaining indeed. The remake also broke the franchise record in Japan which means their two highest grossed Godzilla films were American productions at that point.

Toho Pictures, the original Japanese studio, answered the challenge with a high quality reboot in 2016 with Shin Godzilla. It replaced the 2014 instalment as the highest grossing Godzilla movie in the country by a good distant, and worldwide fans seems to approve it highly as well.

Hardcore fans aside, Hollywood will continue to rule the global cinema market though, albeit with rising competition from the Chinese filmmakers. There’s nothing the Japanese studio can do in near future (because of budgets etc.) besides working with their foreign counterparts instead.

Following the success of the 2014 film, Warner Bros. and Legendary Pictures have joined their media rights to create the MonsterVerse. It’s a shared fictional universe that centred on Godzilla and King Kong.

The 2014 movie has hence became the first instalment of the new franchise. Further productions include Kong: Skull Island in 2017, Godzilla: King of the Monsters in 2019, and Godzilla vs. Kong in 2020.

This will be the final year of my 30's. Time flies, and it seems to fade faster as one gets older. This post is a bit of recap of my adult life and some future … END_OF_DOCUMENT_TOKEN_TO_BE_REPLACED

Trailer for American film Top Gun: Maverick, a sequel to 1986's Top Gun. Beautiful is not the usual word to associate with action movies, but I cannot find a better … END_OF_DOCUMENT_TOKEN_TO_BE_REPLACED

Malaysia will be in lockdown from March 18 to March 31, 2020, to deal with the Covid-19 situation. Officially it's a Movement Control Order (MCO) but it's … END_OF_DOCUMENT_TOKEN_TO_BE_REPLACED

Korean pop idol Sulli, former member of girl group f(x), was found dead at her home on Monday. Authorities are investigating the cause of death, and it's presumed … END_OF_DOCUMENT_TOKEN_TO_BE_REPLACED

Singapore has imposed the circuit breaker measures to curb the spread of Covid-19 since early April. They announced an extension (until June 1) and some new rules a … END_OF_DOCUMENT_TOKEN_TO_BE_REPLACED

A cute photo series amidst the Covid-19 lockdown in Malaysia. Armed forces are present to assist the police to enforce the Movement Control Order (MCO) across the … END_OF_DOCUMENT_TOKEN_TO_BE_REPLACED