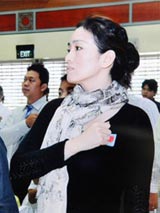 The 43-year-old actress was supposed to collect her identity card on August 23, but failed to show up because she was filming a movie overseas. Her no show irked some Singaporeans who felt that she was disrespecting her new country… but it’s all history now.

Gong Li is married to a Singaporean businessman since 1996, so the switch of citizenship is not entirely surprising. Both China and Singapore do not recognise dual nationality, which literally means that she would have to renounce her Chinese citizenship.

Chinese netizens are generally unhappy about the news… lots of them are criticising Gong Li’s decision, while some are sharing concerns that this would become a trend among popular artists and younger generations.

Some netizens are showing support Gong Li though, stating that it’s her freedom to choose her own path; a few also stated that they would also like to migrate out of China if given the chances.