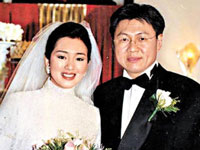 The news came as little surprise though; the couple was rarely seen in public since their marriage in 1996, and rumours of their breaking up have been flying around for years.

Gong Li gave up her Chinese citizenship to become a Singaporean in November 2008, a move seen by many as a last ditch attempt to save her marriage. Some netizens are now accusing her of getting the new citizenship simply for her own sake, as it’s believed that her marriage was already virtually ended back then.

There are also rumours that she is seeing American actor John Cusack, but that’s pretty groundless at the moment.