My first meal in Hong Kong, at Hing Fat Restaurant (興發燒味茶餐廳) at Ashley Road in Tsim Sha Tsui. Hong Kongers live at a fast pace; the waiter seemed a bit impatient just after a short while when we were ordering. But to their credit, the food was served pretty fast as well. I guess it’s just their way of life. 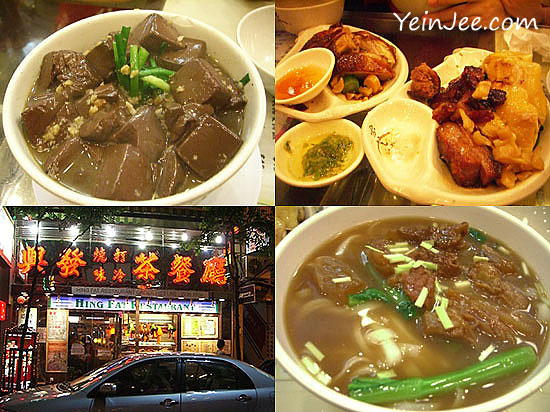 We ordered a bowl of beef-soup rice-noodles, two set of rice meals (with chicken, roast pork and roast goose) and a bowl of pork blood cubes.

The meat was decent, and the rice really good. I guess they cooked the rice with chicken broth (or something else), and the rice they used had a really nice texture. Their rice-noodles were different from what we usually have in Malaysia; theirs were chewier… my sisters kinda liked it, but not for me.

It’s hard to explain how the pork blood cubes taste like… it’s basically tasteless, and it’s the gelatin like texture that matters. The first or two cubes tasted nicely for me, but it was kinda gross after finishing the whole bowl… I can imagine that it’s not something that westerners would like lol.

This will be the final year of my 30's. Time flies, and it seems to fade faster as one gets older. This post is a bit of recap of my adult life and some future … END_OF_DOCUMENT_TOKEN_TO_BE_REPLACED

Trailer for American film Top Gun: Maverick, a sequel to 1986's Top Gun. Beautiful is not the usual word to associate with action movies, but I cannot find a better … END_OF_DOCUMENT_TOKEN_TO_BE_REPLACED

Malaysia will be in lockdown from March 18 to March 31, 2020, to deal with the Covid-19 situation. Officially it's a Movement Control Order (MCO) but it's … END_OF_DOCUMENT_TOKEN_TO_BE_REPLACED

Korean pop idol Sulli, former member of girl group f(x), was found dead at her home on Monday. Authorities are investigating the cause of death, and it's presumed … END_OF_DOCUMENT_TOKEN_TO_BE_REPLACED

Singapore has imposed the circuit breaker measures to curb the spread of Covid-19 since early April. They announced an extension (until June 1) and some new rules a … END_OF_DOCUMENT_TOKEN_TO_BE_REPLACED

A cute photo series amidst the Covid-19 lockdown in Malaysia. Armed forces are present to assist the police to enforce the Movement Control Order (MCO) across the … END_OF_DOCUMENT_TOKEN_TO_BE_REPLACED