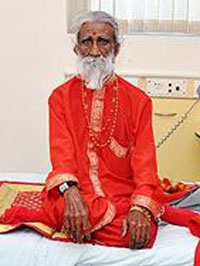 An 82-year-old Indian Sadhu (wandering monk, or holy man) Prahlad Jani has claimed that he has been living for 70 years without food or water.

Jani states that he is living as a monk since he was seven and was blessed by a Goddess when he was 11; since that blessing he gained his sustenance from nectar that filters down through a hole in his palate, and has not passed urine or stools since then.

In 2003, Jani was kept under surveillance for 10 days in Ahmedabad’s Sterling Hospital. He was given no food and only a small amount of water to wash his mouth and the water was later measured to confirm that he did not swallow any of it. He survived the ordeal, but lost a bit of weight, which cast doubts that he could survived without food over a much longer period.

His story caught the attention of India’s Defence Research Development Organisation, which hopes further research could help soldiers survive longer without food, or disaster victims to hang on until help arrives. Jani has again entered the hospital since April 22, 2010, where he is closely monitored for 15-20 days. We’ll see what happens in a week or less. Updates then.

[Update] The sadhu survived the 15 days test. No food, no water, no apparent health issues. Not many details are released though, as the scientists are still busy processing the baffling data.

[With reference from Amazingabilities and Telegraph]

This will be the final year of my 30's. Time flies, and it seems to fade faster as one gets older. This post is a bit of recap of my adult life and some future … END_OF_DOCUMENT_TOKEN_TO_BE_REPLACED

Trailer for American film Top Gun: Maverick, a sequel to 1986's Top Gun. Beautiful is not the usual word to associate with action movies, but I cannot find a better … END_OF_DOCUMENT_TOKEN_TO_BE_REPLACED

Malaysia will be in lockdown from March 18 to March 31, 2020, to deal with the Covid-19 situation. Officially it's a Movement Control Order (MCO) but it's … END_OF_DOCUMENT_TOKEN_TO_BE_REPLACED

Korean pop idol Sulli, former member of girl group f(x), was found dead at her home on Monday. Authorities are investigating the cause of death, and it's presumed … END_OF_DOCUMENT_TOKEN_TO_BE_REPLACED

Singapore has imposed the circuit breaker measures to curb the spread of Covid-19 since early April. They announced an extension (until June 1) and some new rules a … END_OF_DOCUMENT_TOKEN_TO_BE_REPLACED

A cute photo series amidst the Covid-19 lockdown in Malaysia. Armed forces are present to assist the police to enforce the Movement Control Order (MCO) across the … END_OF_DOCUMENT_TOKEN_TO_BE_REPLACED