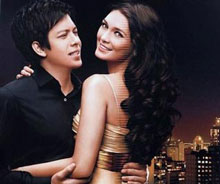 An Indonesian court has sentenced pop star Nazril Irham, better known as Ariel, to three-and-a-half years in prison after sex tapes of him with two tv celebrities appeared online.

The 29-year-old frontman of popular rock band Peterpan/Noah was found guilty for “giving an opportunity for others to spread, produce and prepare a pornographic video.”

The two videos, which were made public in June 2010, showed Ariel having sex on separate occasions with female television celebrities Luna Maya (pic) and Cut Tari, who is married to another man. Ariel has always denied distributing them, claiming that they had been stolen and uploaded without permission.

Unfortunately for him, making the clips is bad enough under the controversial Indonesian anti-pornography law which came into effect in 2008.