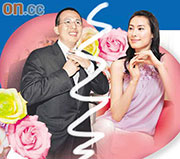 Chinese actress Isabella Leong has announced that her relationship with billionaire Richard Li has ended.

Many neutrals were having doubts ever since they started in 2008 because of the age difference and social status etc. Despite having three children, the ex-couple had never got married. It’s probably just a matter of time for them to walk on separate paths.

They will have joint custody for the kids. People are now wondering if Isabella is going to make her comeback into showbiz. The 22-year-old was after all one of the most promising Asian stars before her hiatus three years ago.