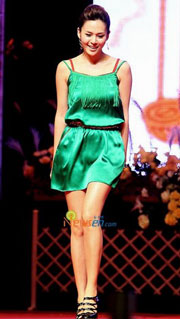 Korean pop star Ivy is blackmailed by her ex-boyfriend who claimed to have some intimate video clips that could expose their relationship.

The ex-boyfriend (Yoo) has been blackmailing Ivy and her agency since October with a video clip and demanded 45 million Korean Won (~ US$50,000) or he would expose their relationship.

Korean police has arrested Yoo on October 31 and has applied for a warrant to keep him in custody for further investigation.

Ivy and Yoo met each other before she became a singer. Their relationship lasted for two years before turning sour in early 2007. It’s reported that Yoo was frustrated that Ivy didn’t acknowledge their relationship in public; on contrary it’s said that Yoo’s violent behaviour is a cause of concern.

Early rumours suggested that Yoo, currently unemployed, possesses a sex tape that he recorded using hidden camera. Later sources suggested otherwise… that the video might not exist at all. The police didn’t comment about this matter.