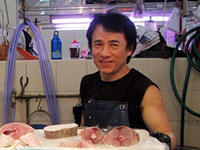 A fish monger in Singapore has been enjoying a bit of celebrity fame for his close resemblance to popular Chinese actor Jackie Chan.

The 48-year-old Mr Chong said that his business has always been well in the past 20 years, partially thanks to his look. He also said that he looks more like Jackie as age grows.

Besides getting extra business, his look also led to a cameo appearance in popular local movie I Not Stupid, starring as none other than ‘Jackie Chan’.

The close resemblance does cause some trouble though, as he’s being asked for autographs and photos quite often despite his denial. [via omy][Cn]