The mass murder in Tokyo’s Akihabara Electric Town has left the nation in shock… a 25-year-old man turned rampage on Sunday noon, killed seven and injured 10 before he was arrested by the cops. 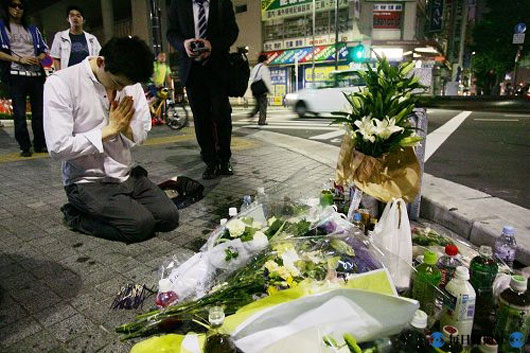 The violence began when the murderer crashed a rented truck into pedestrians, and then jumped out of the vehicle and started stabbing the people he had knocked down before turning on horrified onlookers until he was apprehended.

Three people were killed by the impact of the truck and four from stab wounds.

The murderer had been posting his attack plan on a mobile phone bulletin board since Sunday early morning… obviously nobody was taking him seriously until the attack.

Japanese media is pulling together the postings and police statements, and drew a picture of an angry, lonely young man who meticulously planned the deadly attack.

It’s a sad thing to read, reminds me of the Columbine and Virginia Tech massacre… the saddest thing is that we might be seeing similar random-mass-attack in near future around the world.

My condolences to the victims’ family and friends.

This will be the final year of my 30's. Time flies, and it seems to fade faster as one gets older. This post is a bit of recap of my adult life and some future … END_OF_DOCUMENT_TOKEN_TO_BE_REPLACED

Trailer for American film Top Gun: Maverick, a sequel to 1986's Top Gun. Beautiful is not the usual word to associate with action movies, but I cannot find a better … END_OF_DOCUMENT_TOKEN_TO_BE_REPLACED

Malaysia will be in lockdown from March 18 to March 31, 2020, to deal with the Covid-19 situation. Officially it's a Movement Control Order (MCO) but it's … END_OF_DOCUMENT_TOKEN_TO_BE_REPLACED

Korean pop idol Sulli, former member of girl group f(x), was found dead at her home on Monday. Authorities are investigating the cause of death, and it's presumed … END_OF_DOCUMENT_TOKEN_TO_BE_REPLACED

Singapore has imposed the circuit breaker measures to curb the spread of Covid-19 since early April. They announced an extension (until June 1) and some new rules a … END_OF_DOCUMENT_TOKEN_TO_BE_REPLACED

A cute photo series amidst the Covid-19 lockdown in Malaysia. Armed forces are present to assist the police to enforce the Movement Control Order (MCO) across the … END_OF_DOCUMENT_TOKEN_TO_BE_REPLACED