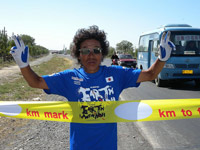 Kanpei Earth Marathon is a project by 61-year-old Japanese comedian Kanpei Hazama to run and sail around the world, with the aims to see and feel the earth with his whole body and soul, and to reach out to people who share the living on this planet.

Kanpei began his journey eastward from Japan in December 2008 and has been moving almost everyday – about 8-10 hours daily (50km per day if running). He’s expected to complete the journey by March 2011, which will see him running 13,000 miles and sailing 10,000 miles.

His journey was being frequently updated on the project’s official site [Jp] and its official Youtube channel. At the time of writing he has completed his 629th day of running and has reached the west of China.