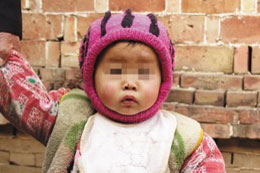 Chinese Police have returned 29 children they rescued from Yunnan, Sichuan and Shandong provinces to the people who bought them, because the children’s real parents could not be found.

According to the police, some women in Yunnan and Sichuan provinces sell their children to make a living. The price of a baby ranges between 5,000 yuan (US$771) and 6,000 yuan. When brokers sell the babies to buyers, the price will jump to 40,000 yuan for a boy and 20,000 for a girl.

According to regulations from the Ministry of Public Security, before locating their biological parents, rescued children must be sent to local welfare agencies. However, in reality, most of these agencies lack funds and staff to care for the rescued children. To prevent them from being homeless, local police sent the children back to the buyers.

A police officer also said that buyers who treated the children well won’t face criminal punishment. Sadly, the report failed to suggest (beside the title) that many of these children might be kidnapped and not “sold” by their birth parents.