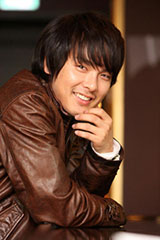 Korean actor-singer Park Yong-ha was found dead at his home in Seoul early Wednesday morning in what appeared to be a suicide. He was 33.

No suicide note was found. His family and friends said that Park had been severely distressed by his father’s disease (terminally ill with stomach cancer), but the exact reason would probably remain a mystery forever.

Park rose to international fame in 2002 with K-drama Winter Sonata. He launched his singing career in Japan soon after and still enjoy reasonably popularity there. His acting career had its ups and downs; his last major success came in 2008 in drama On Air. He was still pretty much in demand though; thus his suicide news has shocked many fans in and out of Korea.