Tens of thousands of Buddhists packed the plaza in front of Seoul City Hall on Wednesday (Aug 27) to protest the alleged religious favouritism of President Lee Myung-bak and his administration.

The rally was organised by Jogye Order of Korean Buddhism, the largest Buddhist group in South Korea. The police estimated that 55,000-60,000 people took part in the rally, including thousands of monks. 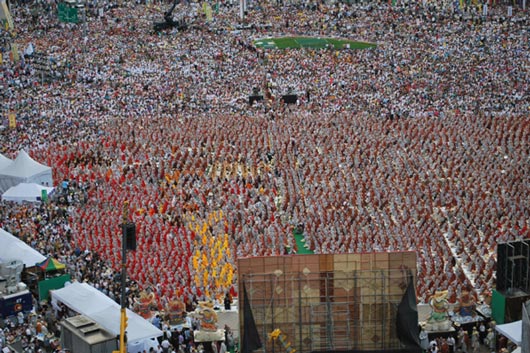 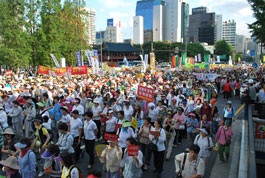 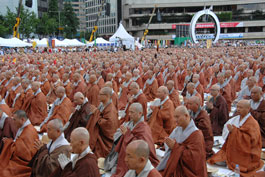 President Lee is a devout Protestant; he was already a controversial character when he was the mayor of Seoul. Discontent among Buddhists has been brewing in recent months as he was alleged to be practising religious favouritism when appointing key positions in the government and Cabinet.

In June 2008, the Buddist community was angered when the Seoul metropolitan area transportation information system (Algoga), administered by the Ministry of Land, Transport and Maritime Affairs, omitted the names of major temples (but not churches) in their map.

The ministry has apologised that it was an accidental mistake, but similar incident happened again in early August… this time it’s the educational geographical information system, administered by the Education, Science and Technology Ministry that made the ‘mistake’.

The major incident that prompted the protest happened in late July when the police searched the car of the Jogye Order leader, the Venerable Jigwan, in the course of arresting Buddhist activists that were suspected to have sought refuge in the temple. The activists are wanted for their alleged involvement in the US beef protest.

The Buddhist protesters are demanding an open apology from President Lee, dismissal of officials accused of biased action and legislation for the religious discrimination. A spokesman said that they would hold more protests across the country if their demands are not met [with reference from Chosun]

According to Korean government’s 2005 statistics, approximately 29% South Koreans are Christian while 23% are Buddhist.

This will be the final year of my 30's. Time flies, and it seems to fade faster as one gets older. This post is a bit of recap of my adult life and some future … END_OF_DOCUMENT_TOKEN_TO_BE_REPLACED

Trailer for American film Top Gun: Maverick, a sequel to 1986's Top Gun. Beautiful is not the usual word to associate with action movies, but I cannot find a better … END_OF_DOCUMENT_TOKEN_TO_BE_REPLACED

Malaysia will be in lockdown from March 18 to March 31, 2020, to deal with the Covid-19 situation. Officially it's a Movement Control Order (MCO) but it's … END_OF_DOCUMENT_TOKEN_TO_BE_REPLACED

Korean pop idol Sulli, former member of girl group f(x), was found dead at her home on Monday. Authorities are investigating the cause of death, and it's presumed … END_OF_DOCUMENT_TOKEN_TO_BE_REPLACED

Singapore has imposed the circuit breaker measures to curb the spread of Covid-19 since early April. They announced an extension (until June 1) and some new rules a … END_OF_DOCUMENT_TOKEN_TO_BE_REPLACED

A cute photo series amidst the Covid-19 lockdown in Malaysia. Armed forces are present to assist the police to enforce the Movement Control Order (MCO) across the … END_OF_DOCUMENT_TOKEN_TO_BE_REPLACED