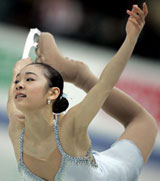 The fans of Leeteuk from Korean boy band Super Junior and fans of figure skating star Kim Yu-na are caught in a blog war after a recent miscommunication.

It all started when Lee mentioned in a radio show that his request to exchange blogroll with Kim was rejected by the 16-year-old figure skating star. Lee’s fans began sending hate messages on Kim’s blog shortly after, and Kim’s fans retaliate. As of the time of writing, the message board for both SuJu and Kim has been shut down temporarily.

SuJu’s fans are giving themselves a bad name really. Just a month ago, some of the fans posted hatred message to a girl after a picture of her posing with one of Suju’s group members was spread online… the girl was so depressed with all the harassment that she finally committed suicide.

Seems like they haven’t learned a lesson from that.