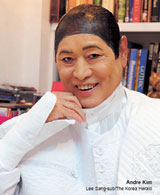 Korean fashion designer Andre Kim has died on Thursday due to pneumonia and colon cancer. He was 74.

Kim was a pop culture icon in Korea. He’s the first prominent male designer in the country, and he was the first Korean designer to hold a fashion show in Paris.

He was famed for designing evening gowns and wedding dresses. He had worked with numerous top Korean stars for his shows and was a highly respected public figure.

His personal fashion and style were as weird as it could be though. Ironic, but iconic nonetheless. Rest in peace Mr Kim.