Popular snack food; had these at a street stall in Namdaemun market. Tteokbokki are sliced rice cakes broiled in sweet-spicy sauce; while odeng (or eomuk) are boiled fish cakes which probably originated from Japan.

Love the tteokbokki, surprisingly chewy, not too spicy; the odeng was a bit soggy, but the soup damn nice. Two dishes at 4000W (~US$4), pretty cheap and filling; it’s more like a full meal instead of snacks from my point of view. 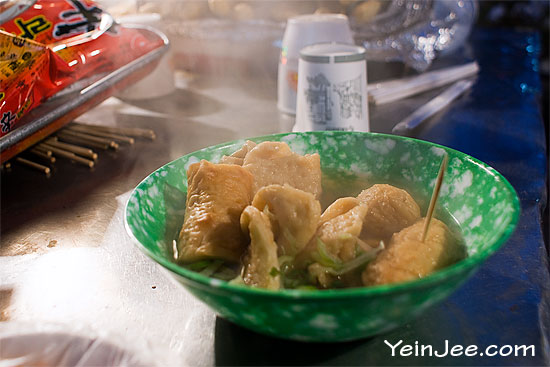 Jajangmyeon, literally fried-sauce-noodle, normally translated as black-bean-sauce-noodle. Originated from China but pretty much evolved into a style of its own.

The Chinese version is noodle with thick meat sauce, whereas the Korean noodle comes with plenty of onions and some potatoes. The taste is different anyway.

Home delivery is common in Seoul; people can order almost every kind of food by phone. My hostel staff helped me with this one, and the food arrived promptly in 10 minutes. 4500W per bowl… 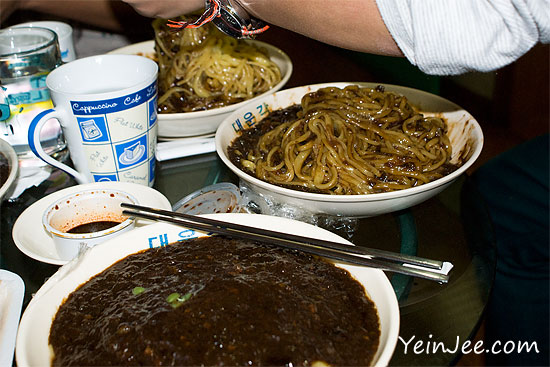 The noodle was ok, but had a really hard time digesting all the onions… stomach ache all night long, and bad breath until the next morning.

Sundae – Nothing to do with ice cream, just with similar pronunciation. Korean sundae are intestines stuffed with various ingredients; the most common fillings are glass noodles and pork blood. It’s sometime known as blood sausages… 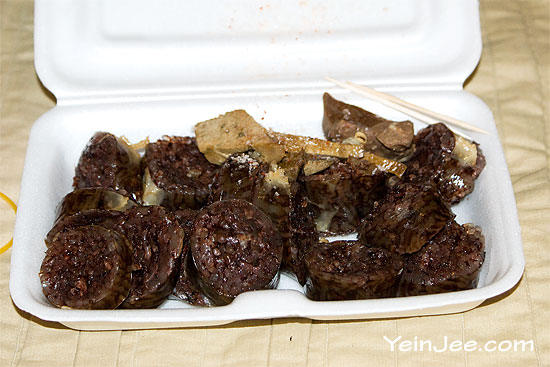 Bought this (2000W) at a street stall in Sungin-dong. Looked a bit gross (my photo obviously doesn’t help), but didn’t taste as bad. It’s like eating jelly with mild meaty taste; decent aroma, but a bit bland tasting wise. There are other cooking methods for sundae; will try those versions if I have the chance.

This will be the final year of my 30's. Time flies, and it seems to fade faster as one gets older. This post is a bit of recap of my adult life and some future … END_OF_DOCUMENT_TOKEN_TO_BE_REPLACED

Trailer for American film Top Gun: Maverick, a sequel to 1986's Top Gun. Beautiful is not the usual word to associate with action movies, but I cannot find a better … END_OF_DOCUMENT_TOKEN_TO_BE_REPLACED

Malaysia will be in lockdown from March 18 to March 31, 2020, to deal with the Covid-19 situation. Officially it's a Movement Control Order (MCO) but it's … END_OF_DOCUMENT_TOKEN_TO_BE_REPLACED

Korean pop idol Sulli, former member of girl group f(x), was found dead at her home on Monday. Authorities are investigating the cause of death, and it's presumed … END_OF_DOCUMENT_TOKEN_TO_BE_REPLACED

Singapore has imposed the circuit breaker measures to curb the spread of Covid-19 since early April. They announced an extension (until June 1) and some new rules a … END_OF_DOCUMENT_TOKEN_TO_BE_REPLACED

A cute photo series amidst the Covid-19 lockdown in Malaysia. Armed forces are present to assist the police to enforce the Movement Control Order (MCO) across the … END_OF_DOCUMENT_TOKEN_TO_BE_REPLACED