Jokbal – Korean pig’s feet, another popular food here. Dined at the Original Jangchungdong Grandmother’s Place a couple of weeks ago – finally a restaurant that I can name in English lol. It’s one of the first jokbal restaurants at the famous Jangchungdong jokbal street in Seoul… 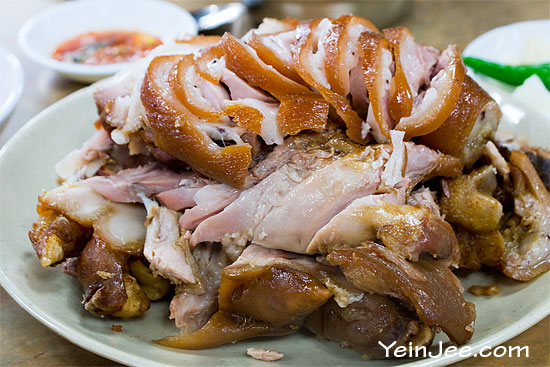 The jokbal are prepared in the simplest way… with 20-30 trotters seasoned and simmered for a few hours in one large pot.

The secret of each restaurant is the simmering broth which is repeatedly used everyday. Most would claim that their broth are used since the restaurants were established… and this particular one has been running for more than 50 years.

If you are not familiar with oriental cuisine you might be shocked by the fact, but the simmering broth is often perceived as ‘the older the better’ in oriental cooking. It’s believe that the essence of the meat and ingredients would accumulate day by day… it’s valuable stuff that new restaurants can’t compete with.

There’s not much spices that were used to simmer the jokbal here. The first bite brought out a strong and fresh meaty taste; the skin was chewy but the meat was tender; and it’s not oily at all… absolutely fantastic at the beginning.

But after a few pieces it became a bit bland for me – as Malaysians tend to prefer heavier flavour – and it’s odd to eat it cold. In the end I had to rely on the sauces and chillies to finish it off. Worth trying but not a dish I would take regularly.

This will be the final year of my 30's. Time flies, and it seems to fade faster as one gets older. This post is a bit of recap of my adult life and some future … END_OF_DOCUMENT_TOKEN_TO_BE_REPLACED

Trailer for American film Top Gun: Maverick, a sequel to 1986's Top Gun. Beautiful is not the usual word to associate with action movies, but I cannot find a better … END_OF_DOCUMENT_TOKEN_TO_BE_REPLACED

Malaysia will be in lockdown from March 18 to March 31, 2020, to deal with the Covid-19 situation. Officially it's a Movement Control Order (MCO) but it's … END_OF_DOCUMENT_TOKEN_TO_BE_REPLACED

Korean pop idol Sulli, former member of girl group f(x), was found dead at her home on Monday. Authorities are investigating the cause of death, and it's presumed … END_OF_DOCUMENT_TOKEN_TO_BE_REPLACED

Singapore has imposed the circuit breaker measures to curb the spread of Covid-19 since early April. They announced an extension (until June 1) and some new rules a … END_OF_DOCUMENT_TOKEN_TO_BE_REPLACED

A cute photo series amidst the Covid-19 lockdown in Malaysia. Armed forces are present to assist the police to enforce the Movement Control Order (MCO) across the … END_OF_DOCUMENT_TOKEN_TO_BE_REPLACED