The interview was done via an interpreter; the only English words Rain had said were “Hi, I am Rain” and “Thank you, thank you. Nice to be hearing from you”… but I’ll take it as an honour regardless. Full transcripts below… 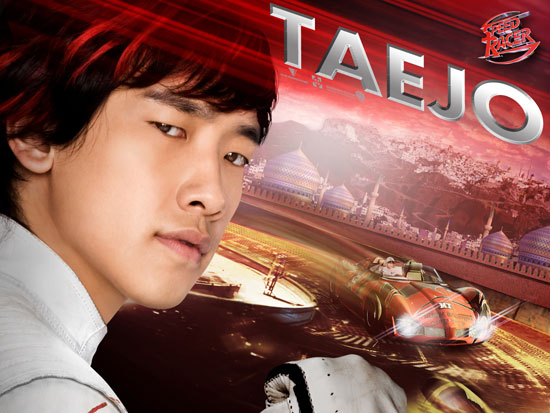 – Anyohaseyo, thanks for accepting the interview.

Q: What is your biggest attraction to appeal to the western audiences?

I think being an Asian itself is a big attraction for the audience over here.

Q: What is the biggest different working in Korea and in a Hollywood production?

Actually there is not much different between working in America and Korea; maybe the language is different, but most of all it’s similar.

Q: What is the biggest challenge while filming Speed Racer? Is English still a barrier?

Actually it hasn’t been a year yet that I started to learn English; I am trying to do my best to get this language overcome. By next year I think I will be much better and free from this English barrier.

For now I don’t want to make any mistakes in public, so I am using an interpreter.

Q: Is Rain a fan of the original anime?

Actually, Speed Racer was before I was born. I didn’t have the chance to watch what it is, but now I am a huge fan of it, definitely.

Q: Who is your best buddy among the cast? Did you make any good friends while filming the movie?

Actually for our cast, it was like a family to me; but amongst them, Susan Sarandon and Matthew Fox are my best friends… if I have to pick somebody.

Q: Tell me more about the directors.

The Wachowski brothers were really really nice and they are very great person to work with.

There is nothing really in common between my character and his, but me being a bit dry… and quiet… might be a bit similar.

Q: I read that you are disguising as a woman in the movie; mind sharing more about the story?

This is my first time dressing like a woman, and it’s the first time I knew my legs are actually very pretty.

Q: There are a few Korean stars that are making their Hollywood debut this year, what do you think about the rising popularity of Korean artists in US?

Q: Is this the proudest moment in your career, or is there any other thing else?

Yes, for me right now it is the proudest moment, but I wish there will be more proud moments in future in my life as well.

– Best wishes to you. Thanks for the interview, kamsahamnida.

Thank you, thank you. Nice to be hearing from you [The End]

The interview was done together with Stareastasia which I’m one of the editors. We were actually invited to cover Rain’s promotion in Los Angeles, but none of the editors could make it to LA (no budget lol); so we had to resort to a phone interview instead… which was not bad at all.

To be frank there wasn’t much direct conversation with Rain. I was a bit surprise that he didn’t use his English for the interview; I have watched some of his English interviews on Youtube, and I think he did pretty well with those. He sounds humble and polite during the interview, a bit more of confidence with his English is what he need to excel in the west.

I know some of Rain’s fans are eager to see some saucy and more private questions, but do mind that this is a promotion event for Speed Racer after all… I should keep the questions related to the movie as much as possible.

Speed Racer will hit the theatres on May 9th. You can watch some trailers and get more information about the movie as its official website. Thanks to Rain, Warner Bros, and the coordinators for the interview.

This will be the final year of my 30's. Time flies, and it seems to fade faster as one gets older. This post is a bit of recap of my adult life and some future … END_OF_DOCUMENT_TOKEN_TO_BE_REPLACED

Been planning for a while to make Japan my next big trip destination. Seems like its not happening soon because of other commitments. And I want to avoid the … END_OF_DOCUMENT_TOKEN_TO_BE_REPLACED

Scanned picture of a 1998 cover of the Victoria's Secret swimwear catalogue. The models are Stephanie Seymour, Daniela Peštová and Tyra Banks - the first generation … END_OF_DOCUMENT_TOKEN_TO_BE_REPLACED

Trailer for American film Top Gun: Maverick, a sequel to 1986's Top Gun. Beautiful is not the usual word to associate with action movies, but I cannot find a better … END_OF_DOCUMENT_TOKEN_TO_BE_REPLACED

Singapore has imposed the circuit breaker measures to curb the spread of Covid-19 since early April. They announced an extension (until June 1) and some new rules a … END_OF_DOCUMENT_TOKEN_TO_BE_REPLACED

A cute photo series amidst the Covid-19 lockdown in Malaysia. Armed forces are present to assist the police to enforce the Movement Control Order (MCO) across the … END_OF_DOCUMENT_TOKEN_TO_BE_REPLACED

Malaysia will be in lockdown from March 18 to March 31, 2020, to deal with the Covid-19 situation. Officially it's a Movement Control Order (MCO) but it's … END_OF_DOCUMENT_TOKEN_TO_BE_REPLACED

Korean pop idol Sulli, former member of girl group f(x), was found dead at her home on Monday. Authorities are investigating the cause of death, and it's presumed … END_OF_DOCUMENT_TOKEN_TO_BE_REPLACED