A group of Korean animal rights activists held a demonstration at a large dog meat market in Seongnam (near Seoul) last weekend to protest dog eating. 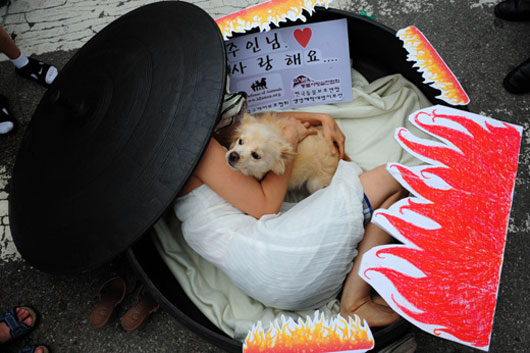 Image by Chosun [Kr]. Koreans have been eating dog meat for thousand of years. One of the dishes is Bosintang (lit. invigorating soup), a traditional soup with dog meat as primary ingredient which is popular during summer.

It’s estimated that over a million of dogs are slaughtered every year in Korea to meet market demand. The practise has caused some uproar internationally, and some younger Korean generations are beginning to ditch this tradition.

Personally I find this hypocritical. Although I’m not a vegetarian I always support people who promote the cause, different opinions but they have valid reasons. But I can’t agree on those who are against eating dogs when they have no problem chowing cows, pigs and chickens… domestication whatever.