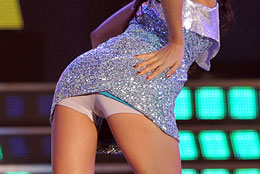 Kpop these days… where flashing your undergarments and plenty of skin are gradually becoming a norm.

Sex sells, we know that. I don’t want to sound hypocrite suggesting that pop stars should cover themselves up, sexiness doesn’t hurt if it’s done right. But there’s a borderline on how much is too much.

The caption pic… it’s from a popular girl group, on a pretty big show, and it’s not accidental. To be fair it’s nothing compared to Jpop or western pop, but Kpop used to be a lot more decent until the past couple of years. Things change, for better or worse.