Malaysian authorities are limiting access to capital Kuala Lumpur on June 9 to avert a planned rally. Major city roads and public transportation hubs will be shut down or diverted from midnight (for 20-24 hours); restriction orders have also been issued to key individuals forbidding them from entering the city centre during the period. 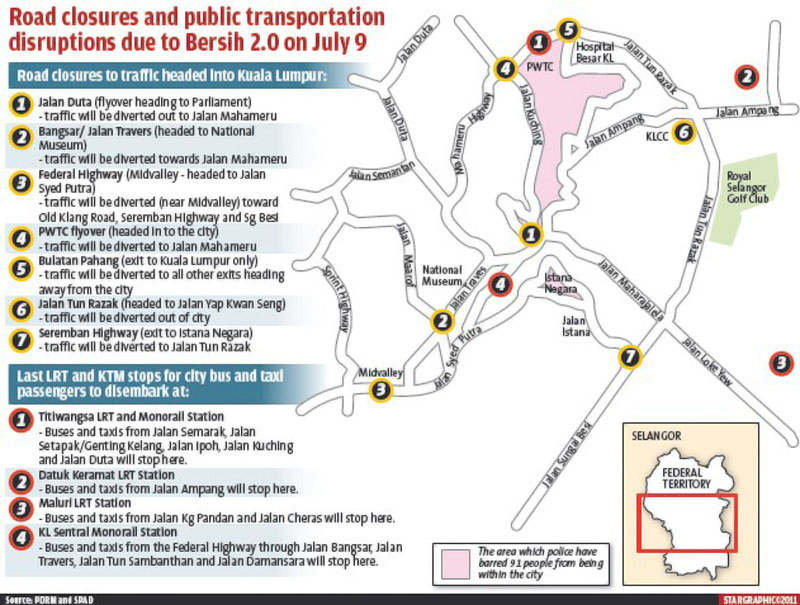 The rally is organised by an BERSIH, an opposition-linked NGO, in demand for the electoral system to be reformed. I’ll skip the details to not bore most of you who are not from Malaysia. To make it short, our voting system is heavily biased in favour of the governmental coalition which has been ruling the country for 50+ years.

A similar mass gathering was held rather peacefully in 2007 without major incidents, so I’m quite appalled by the government’s iron-fist countermeasures despite not being a fan of public demonstrations to begin with. The rally will carry on regardless, hope that it won’t turn into a tragic episode. Check BERSIH’s website for updates.

This will be the final year of my 30's. Time flies, and it seems to fade faster as one gets older. This post is a bit of recap of my adult life and some future … END_OF_DOCUMENT_TOKEN_TO_BE_REPLACED

Trailer for American film Top Gun: Maverick, a sequel to 1986's Top Gun. Beautiful is not the usual word to associate with action movies, but I cannot find a better … END_OF_DOCUMENT_TOKEN_TO_BE_REPLACED

Malaysia will be in lockdown from March 18 to March 31, 2020, to deal with the Covid-19 situation. Officially it's a Movement Control Order (MCO) but it's … END_OF_DOCUMENT_TOKEN_TO_BE_REPLACED

Korean pop idol Sulli, former member of girl group f(x), was found dead at her home on Monday. Authorities are investigating the cause of death, and it's presumed … END_OF_DOCUMENT_TOKEN_TO_BE_REPLACED

Singapore has imposed the circuit breaker measures to curb the spread of Covid-19 since early April. They announced an extension (until June 1) and some new rules a … END_OF_DOCUMENT_TOKEN_TO_BE_REPLACED

A cute photo series amidst the Covid-19 lockdown in Malaysia. Armed forces are present to assist the police to enforce the Movement Control Order (MCO) across the … END_OF_DOCUMENT_TOKEN_TO_BE_REPLACED