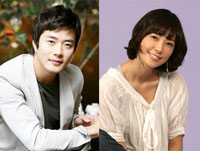 The wedding announcement is not entirely welcomed though; some overfanatic netizens are objecting to the marriage, pointing fingers at Sohn for her past romances.

Some others are speculating that the 28-year-old actress is pregnant and hence the sudden announcement of marriage.

The rumours and criticism were spreading like wildfire, to the extend that Kwon has to make a second announcement (online) to clear the doubts and defend his wife-to-be. [Read more about the saga from Coolsmurf]

It’s tough to be a celebrity, it’s tougher to be a popular one. They have my blessings though… congratulations.

Update – Wedding day is here, with truckload of celebrity guests here and here.