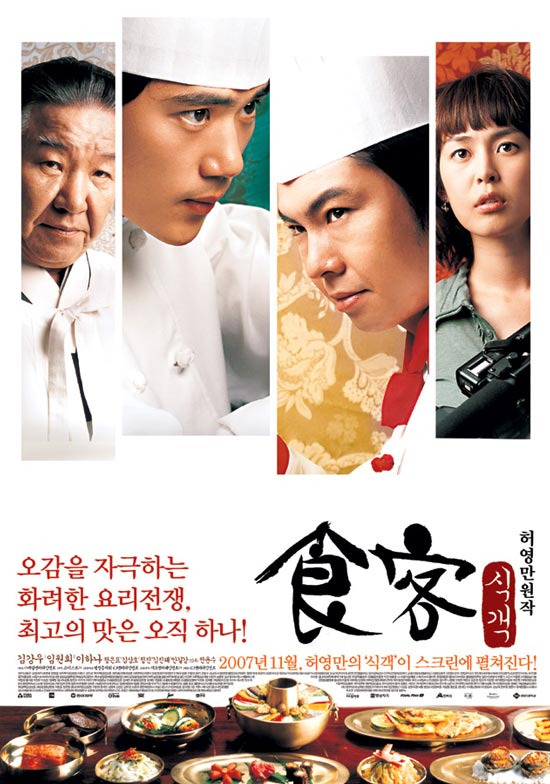 Sung-chan (Kim Kang-woo) and Bong-ju (Lim Won-hie) were apprentices at a renowned Korean restaurant; Sung-chan was seen as the best candidate to take over the restaurant, but suffered a setback when his blowfish dish poisoned some customers and almost killed them.

Sung-chan retired from cooking since then and became a farmer in the countryside; while Bong-ju took charge of the restaurant and became a powerful and famous chef.

A few years later, a nationwide cooking competition was started to find the rightful heir for a symbolic knife that once belongs to the last Korean royal chef who cut his arm to show his loyalty to the king following the Japanese invasion which ended the Chosun Dynasty in early 20th century.

The rivalry between Sung-chan and Bong-ju was ignited again, as both their grandfathers were students of the last royal chef.

Sung-chan didn’t plan to compete in the competition initially, but changed his mind after some persistent persuasion by an energetic reporter Jin-su (Lee Hana). Bong-ju, knowing how strong an opponent Sung-chan could be, started using all the dirty tricks to defeat Sung-chan…

Le Grand Chef was a huge hit in Korea. The storyline is quite simple and direct; I think the main attractive point of the movie is the cooking and settings. Even if the story didn’t appeal to the audiences, they would be charmed by all the traditional Korean dishes that were shown in the movie.

A drama version of the comic – starring Kim Rae-won and Nam Sang-mi etc. – is currently airing on SBS channel in Korea.

This will be the final year of my 30's. Time flies, and it seems to fade faster as one gets older. This post is a bit of recap of my adult life and some future … END_OF_DOCUMENT_TOKEN_TO_BE_REPLACED

Trailer for American film Top Gun: Maverick, a sequel to 1986's Top Gun. Beautiful is not the usual word to associate with action movies, but I cannot find a better … END_OF_DOCUMENT_TOKEN_TO_BE_REPLACED

Malaysia will be in lockdown from March 18 to March 31, 2020, to deal with the Covid-19 situation. Officially it's a Movement Control Order (MCO) but it's … END_OF_DOCUMENT_TOKEN_TO_BE_REPLACED

Korean pop idol Sulli, former member of girl group f(x), was found dead at her home on Monday. Authorities are investigating the cause of death, and it's presumed … END_OF_DOCUMENT_TOKEN_TO_BE_REPLACED

Singapore has imposed the circuit breaker measures to curb the spread of Covid-19 since early April. They announced an extension (until June 1) and some new rules a … END_OF_DOCUMENT_TOKEN_TO_BE_REPLACED

A cute photo series amidst the Covid-19 lockdown in Malaysia. Armed forces are present to assist the police to enforce the Movement Control Order (MCO) across the … END_OF_DOCUMENT_TOKEN_TO_BE_REPLACED