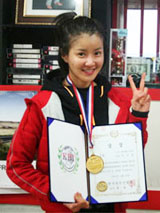 Korean actress Lee Si-young recently made headline by winning her first boxing championship, presumably in an amateur (or intermediate) tournament.

It’s not uncommon for celebrities to have a hobby like every other person, but it’s definitely unusual to see a pretty actress taking a combative sport seriously.

Most celebrities would avoid taking part in something that could leave a scar or bruise on their face. She’s cool, good luck to her future tournaments.

[Update] She made it into the South Korean national team in 2013, brava!!!