A busy month of marriages in Chinese and Korean showbiz. 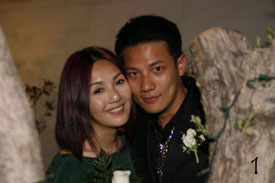 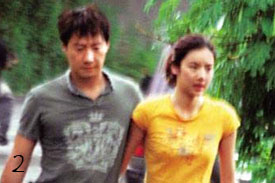 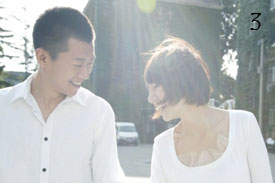 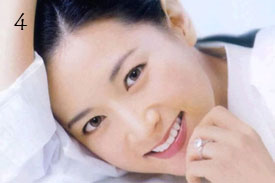 Hong Kong star Andy Lau has admitted that he and long term partner Carol Choo have registered as husband and wife in Vegas in June 2008. The announcement was made after the couple’s debut public appearance in 24 years. The star however denied that they have a kid, but are in the process of making one.

[1] Miriam Yeung has confessed as well, that she is married to non-celebrity boyfriend earlier this month, also in Vegas. The singer-actress has yet to move in with her hubby though; lots of Chinese couples only considered themselves married after traditional ceremonies, whereas registration is more of a formality. The couple is expected to complete the nuptial in 2010.

[2] Actor-singer Leon Lai and model girlfriend Gaile Lok are also rumoured to have married in March 2008. The lady has let her tongue slipped a few times, but the supposed hubby has yet to acknowledge the marriage somehow.

[3] In China, Xia Yu and Yuan Quan have tied the knot after 10 years into relationship. The celebrity couple got into a bit of triangle entanglement in 2007, but managed to pull it off in the end. Hope that the marriage will be a happily-ever-after one, but once a cheater always a cheater… that’s what I believe.

[4] Another celeb that walked the aisle after a decade of romance is Korean actress Lee Young-ae, who got married to an American businessman, pretty much to everyone’s surprise. The public are rather amused on how she managed to keep the relationship under the radar all these years.

Shame on the Korean paparazzi lmao. And in an attempt to savage their reputation, the press managed to dig (or create) the news that actress Yun Jung-hee is getting married soon; will follow up when it actually happens.

This will be the final year of my 30's. Time flies, and it seems to fade faster as one gets older. This post is a bit of recap of my adult life and some future … END_OF_DOCUMENT_TOKEN_TO_BE_REPLACED

Trailer for American film Top Gun: Maverick, a sequel to 1986's Top Gun. Beautiful is not the usual word to associate with action movies, but I cannot find a better … END_OF_DOCUMENT_TOKEN_TO_BE_REPLACED

Malaysia will be in lockdown from March 18 to March 31, 2020, to deal with the Covid-19 situation. Officially it's a Movement Control Order (MCO) but it's … END_OF_DOCUMENT_TOKEN_TO_BE_REPLACED

Korean pop idol Sulli, former member of girl group f(x), was found dead at her home on Monday. Authorities are investigating the cause of death, and it's presumed … END_OF_DOCUMENT_TOKEN_TO_BE_REPLACED

Singapore has imposed the circuit breaker measures to curb the spread of Covid-19 since early April. They announced an extension (until June 1) and some new rules a … END_OF_DOCUMENT_TOKEN_TO_BE_REPLACED

A cute photo series amidst the Covid-19 lockdown in Malaysia. Armed forces are present to assist the police to enforce the Movement Control Order (MCO) across the … END_OF_DOCUMENT_TOKEN_TO_BE_REPLACED