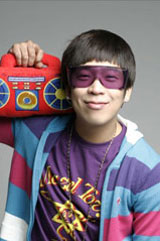 Korean entertainer MC Mong is indicted for dodging the mandatory military service by pulling out his teeth.

He was exempted from fulfilling in duties in 2007 due to dental problems, but police has found out that he was pulling out extra teeth on purpose to dodge the draft.

MC Mong has 12 teeth missing, claimed to be caused by tooth decay, but the cops are saying that only eight of those were lost naturally, with four extra being removed on purpose so that he could fail the physical requirement for enlistment.

Dodging military service is a huge taboo and serious crime in South Korea. The singer is still claiming innocent and insisting that all the teeth were pulled out because of health condition, but unfortunately from public’s point of view he is already guilty as charged, and his entertainment career as good as over.

Regardless of his intention I do have a bit of sympathy for the fact that if missing-teeth could be seen as a health criteria… losing eight is probably bad enough to be considered for exemption.

This will be the final year of my 30's. Time flies, and it seems to fade faster as one gets older. This post is a bit of recap of my adult life and some future … END_OF_DOCUMENT_TOKEN_TO_BE_REPLACED

Trailer for American film Top Gun: Maverick, a sequel to 1986's Top Gun. Beautiful is not the usual word to associate with action movies, but I cannot find a better … END_OF_DOCUMENT_TOKEN_TO_BE_REPLACED

Malaysia will be in lockdown from March 18 to March 31, 2020, to deal with the Covid-19 situation. Officially it's a Movement Control Order (MCO) but it's … END_OF_DOCUMENT_TOKEN_TO_BE_REPLACED

Korean pop idol Sulli, former member of girl group f(x), was found dead at her home on Monday. Authorities are investigating the cause of death, and it's presumed … END_OF_DOCUMENT_TOKEN_TO_BE_REPLACED

Singapore has imposed the circuit breaker measures to curb the spread of Covid-19 since early April. They announced an extension (until June 1) and some new rules a … END_OF_DOCUMENT_TOKEN_TO_BE_REPLACED

A cute photo series amidst the Covid-19 lockdown in Malaysia. Armed forces are present to assist the police to enforce the Movement Control Order (MCO) across the … END_OF_DOCUMENT_TOKEN_TO_BE_REPLACED